Leaders in the outdoor leadership space are
quite familiar with a wilderness ethic and organization called Leave No Trace.
Originally a program created by the United States Forest Service in the late
1980s, the organization offers guidelines to people who venture into the
wilderness to help reduce their negative impact and preserve it for future
generations. LNT has become the gold standard for organizations who operate in
America’s backcountry environments.
LNT is not a well-known philosophy beyond the
outdoor industry. But perhaps it should be. This argument was introduced by New
York Life CEO Ted Mathas,
while speaking at an event hosted by Outward Bound USA that honored New
York Life Foundation’s work with grieving teens. Mathas, himself an
alumnus of Outward Bound’s wilderness programs, made the connection as he
discussed his journey to becoming an effective CEO. He highlighted the
importance of leaders putting their egos aside and “leaving no trace” by
respecting the culture that exists and supporting people rather than focusing
on their own agendas.
Mathas’ insights could be expanded to include
many of the seven principles listed by Leave No Trace:
All of our institutions are currently under
tremendous strain. Rapid change and technological advances are only going to
accelerate. Corporate leaders would do well to follow the words of Mathas and
look to organizations that have been advising leaders about how to navigate the
wilderness, where leaders have been successfully and safely guiding into the
unknown.
About Mark Brown: 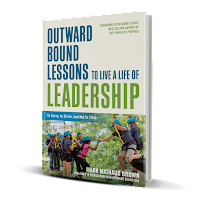 Mark Brown is the author
of Outward Bound Lessons to Live
a Life of Leadership: To Serve, to Strive, and Not To Yield. Originally
a native of Northeastern Ohio, Mark moved to Naples, Florida where he
worked as a writer and magazine editor. At the age of 25, he decided to attend
a 23-day trip to an Outward Bound course in Utah. After taking a temporary job
as a van driver for Outward Bound in Minnesota, he helped successfully search
for and rescue a teenage boy that had become separated from the group. After
this, Outward Bound asked him to become an instructor which began a 22-year
working relationship with the organization. He accrued over 1,000 days in the
wilderness as an instructor. He earned a master’s degree in
business/entrepreneurship from Western Carolina University and has since served
as a transformational leadership consultant in a variety of industries.