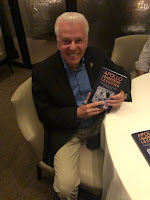 A simple definition of
leadership is “Leadership is influencing others to do what they would not do
if left to their own accord.”

Consider the most memorable speeches meant to persuade people: Martin Luther King Jr.’s 1963 “I have a dream…” speech, Lincoln’s Gettysburg Address and John F. Kennedy’s “We choose to go to the moon” speech at Rice University.

What made these speeches
so persuasive was not necessarily their oration, but their vision and appeal to
the heart as well as the mind, and their construction. Let’s focus on Kennedy’s
“We go to the moon” speech. This address followed a common structure for
enrollment speeches—speeches to persuade.
Kennedy used two
organizing principles for his talk. The first was chronology, starting with the
past and ending with the future. The other was Aristotle’s three forms of
persuasion: logos, pathos, and ethos—logic, emotion, and credibility.
The Past
Kennedy started by
talking about the past and what led the US to its current situation. He
described in detail the breakneck pace at which technology was evolving,
likening 50,000 years of human history to fifty years.  Continuing with this analogy, he said: “Then
about ten years ago, under this standard, man emerged from his caves to
construct other kinds of shelter. Only five years ago man learned to write and
use a cart with wheels.” And at this pace, man will have “literally reached the
stars before midnight tonight.”
Kennedy wanted to
propose that reaching the moon was almost within our grasp, should we choose to
travel there; that our past has now presented us with this opportunity.
The Present
His speech then shifted
to the present, hinting at the fact that no matter what we do, Russia would
continue with its space program: “the exploration of space will go ahead,
whether we join in it or not.” He contrasted the Soviet Union with the US. Both
were competitors, but one would win. He said that the US must “become the
world’s leading space-faring nation” in order to increase our own safety and
security. Traveling to the moon was necessary to preserve our way of life,
Kennedy inferred.
The Future
In order to achieve this
objective of landing on the moon inside of ten years, Kennedy then described
what the country had already done to prepare for this future endeavor. He
talked about the investments that had already been made in facilities,
technology, Saturn rockets, and satellites, and the benefit to the American
people of investing their hard-earned tax dollars in the mission—namely, a growing availability of high-paying
jobs for skilled scientists. By committing to this future mission, we would be
continuing the work already started.
Parallel to this
presentation of history, current challenges, and future achievements, Kennedy
used the framework of logos, pathos, and ethos.
Logos
Logos, or logic, is one
element that Kennedy used throughout his Rice speech. He described all the
investments made up to that point in space exploration and crafted a logical
argument for why the US needed to invest at a more aggressive rate in order to
gain the upper hand against the Soviet Union.
Pathos
Americans were already
on edge after Russia demonstrated superiority in space. So, Kennedy leveraged
that insecurity, tapping into that emotion, fear and expressing sympathy for
those real feelings.  That Russia might
soon control the skies created a security weakness for the US. But Kennedy also
appealed to our pride. “But this city of Houston, this State of Texas, this
country of the United States was not built by those who waited and rested and
wished to look behind them. This country was conquered by those who moved
forward—and so will space.”
Ethos
Kennedy also
demonstrated source credibility or authority—ethos—as he spoke, so that those in the audience did
not question his statements.
On top of making a
logical case for investing heavily in space exploration, Kennedy made Americans
feel. They were afraid, then hopeful, then resolved, and then proud of the
ambitious plan their president had outlined.
In addition to
chronology and Aristotle’s forms of persuasion, Kennedy also used tried and
true communication patterns.
Communication Patterns
If you listen to
Kennedy’s speech, you will notice the following speech patterns and speaking
style points:

Bio:  Dick Richardson is
the founder and CEO of Experience to Lead, a firm that
offers unique, immersive experiences to improve the leadership skills of senior
business executives.  He is also the
author of Apollo
Leadership Lessons (Authority Publishing), a book that demonstrates
what how the tactics employed by the moon program’s key decision-makers can be
applied in business today, from the C-suite on down to the frontline.