The generally accepted definition of
being accountable is that “you do what you say you are going to do.”  Yet everyone will inevitably fail on this
accord.  Does that mean they are not
accountable?  I think it is when someone
does not “do what they said they would do” that accountability is determined.  Someone who is non-accountable will tend to
make excuses, point fingers, deny, deflect or refuse to change.  Accountable people will take responsibility
for not delivering on the desired results and start doing something different
until the desired results are achieved.
Wouldn’t life be great if everyone
exhibited accountable behavior 100% of the time?  As great as that idea sounds it is not
realistic and leaders must decide what to do when one of their reports is not
acting accountably.  This action is
generally known as holding someone
accountable.  To effectively hold someone
accountable the leaders sets the foundation by setting clear expectations, contracting,
incentivizing, and putting feedback mechanisms in place.  If the employee does not deliver on the
desired results and then doesn’t act accountably the leader has to step in and coach,
reassess, train, or even (re)set consequences.
Continued non-accountable behavior can lead to disciplinary actions and
even termination.
But who really has the accountability
during this process?  Who is the one
doing something different until the desired results are achieved?  The leader!
The whole notion of holding someone accountable is really a myth.  When a leader says they are holding someone
accountable what they are really saying that they are taking the accountability
away from the individual.  They are now
the ones that are doing something different until the desired results are
achieved.  And if they don’t achieve the
desired results their leader is going
to do the same thing to them.  This is
called leader-led accountability and is the norm in most organizations.
There are two significant problems with
this approach to managing accountability.
One is that not everyone is good at taking the accountability from their
employees (formerly known as “holding them accountable”).  Some leaders are afraid of alienating their
employees so they shy away from it or they convince themselves they can’t do that
until they are perfectly accountable themselves.  The second problem is that it creates very
upward looking organizations.  Employees
are constantly looking up to their boss as they are the ones whose expectations
they have to meet and they are the ones who will take their accountability away
if they don’t meet them.
But there is another way a leader can
manage accountability and that is by setting up their team to be
accountable.  On accountable teams when
someone fails to meet expectations and aren’t doing something different to get
those results, the team members step in.
To many this sounds Pollyanna but more than likely you have been on
accountable team at some point in your life.
Take a moment and think of the best team you have ever been a part
of.  It might be your family, a high
school sports team, volunteer organization, or a work team.  As you think about that team, I am confident
it had the basics of all functional teams: (1) clear purpose, (2) some way of
measuring whether you were achieving that purpose, (3) competent people, and
(4) capable process.  But if it was a
really good team than it probably had one more thing and that was a willingness
and ability to deal with any issues that were getting in the way of the team
achieving its purpose.  This meant when
there were team members not upholding their end of the deal the other team
members took the accountability and addressed the issue(s).
What made this all possible and what
separates that team from most teams you have been on are two things.  First there was a real and meaningful shared
fate on the team.  In other words, what
happened to one, happened to all.  You
either won together or you lost together.
This provided the motivation for the team members to take on the
accountability issue.  The second thing
your best team had was a real and meaningful level of trust amongst the team
members.  This made it possible to deal
with those real issues without damaging the team.
For today I want to focus on how to do
the first step and that is to build a meaningful shared fate on the team.  Good coaches know how to do this (e.g. when
someone is late for practice, everybody runs) as does the military – think boot
camp.  In my experience I have come to
realize that few business leaders do.
They typically look at their employees as having separate
accountabilities (“John is accountable for sales, Mary is accountable for
operations, etc.”) and then wonder why they aren’t functioning as a team.  Building a shared fate starts with the leader
thinking of their team as a group of individuals who are responsible for
achieving the team’s purpose and achieving the team’s metrics.  When the leader starts thinking in those term’s
they start engaging in the behaviors necessary to build a shared fate on the
team.  You can help build a shared fate
by putting everyone’s desk in the same office, by making it hard to get on the
team, by going through a difficult situation together, by sharing a common
passion for the outcome, or even by creating a common enemy.  However, you choose to do it, leaders and
coaches who want their team to become accountable must first focus on creating
a real and meaningful shared fate for the team.
As that happens the accountability burden starts to become less for the
leader. 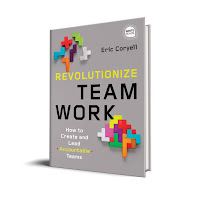 ERIC
CORYELL dedicates his
time to helping organizations engage their employees through strategic
alignment, leadership development, and the creation of functional and
accountable teams. Eric’s new book is Revolutionize
Teamwork, a quick read packed with valuable information that shows you
how to create and lead accountable teams built on shared trust. Using the
principles Eric outlines in this book leads to teams that are better able to
make decisions and are motivated by group success.
« Diversity and Inclusion – Two Very Different Concepts
Why Purpose, Mission, Vision and Values Really Do Matter »
AFTER ENTRY