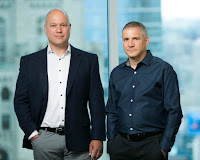 You arrive at work one morning, take the elevator up
to your appointed floor, amble down the carpeted hallway staring at your shoes
and wondering what the day has in store for you, open your door…and there sits
a ferocious lion. As startled as you are, the lion roars a mighty roar.
If you are like most people, in the blink of an eye
you slam the door, turn tail and run as fast as you can in the opposite
direction.
In the blink of an eye: You saw a lion where a lion
shouldn’t be; You absorbed the implications of there being a lion, untethered,
mere feet from you; You thought about what to do about that; You decided on a
course of action; and you implemented that course of action with haste. In the
blink of an eye.

The sensing, absorbing, thinking, and deciding
functions that you just processed were extremely efficient, and so you were
able to get to action right away. No confusion, no mixed messages, no need for
consensus-building or alignment, no persuasion necessary – just a very, very
smooth path from sensing to fleeing.
The Actual Lion
Now, rather than the lion, substitute a defining
business challenge licking its chops on your desk. Ask yourself which people,
from in and around your organization:
·
Play a sensing role with respect to this lion;
·
Act as absorbers, picking up stimulus from those
sensors and translating them into implications;
·
Gather and think about implications and translate them
into options;
·
Consider the options, weigh them, and produce
decisions; and
·
Ultimately, implement or drive the actions that will enact
those decisions.
In most corporate settings, the answer is probably a
large group of people.
The response to your metaphorical lion doesn’t happen
– can’t happen – in the blink of an eye because those functions are played by a
lot of people, distributed across and, sometimes, outside the organization. 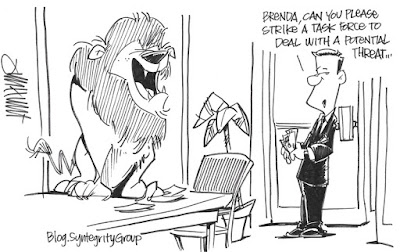 Sometimes, the response won’t get triggered at all (or
gets triggered far too late) because business challenges don’t usually present
themselves so plainly as our lion.
Take a new competitive threat for example…
(SENSE) Sales people might hear and
observe their customers’ reactions to that threat – as might your market
researchers, call center folks, external market experts, and even your finance
team as they watch the erosion of market share and revenue.
(ABSORB) Some of those people may
also absorb the implications of what they’re seeing, and there are also likely
others whose job it is to explicitly look for trends like this and consider what
they might mean.
(THINK) When fed an alarming trend,
management will think about what to do about it (ideally, informed by the
sensors and absorbers), and/or may outsource the thinking to experts and/or
consultants.
(DECIDE) Those same managers may
also decide on a course of action or bump it up the ranks to decide.
(ACT) And a team may ultimately be
launched to implement the resulting action plan, together with a steering
committee and supported by project managers, communications people, and so on.
… and months pass…
Meanwhile, the lion has eaten your lunch.
Taming
the Lion
Organizational SATDA – sensing, absorbing, thinking,
deciding, and acting – is slow and unwieldy because so many people are involved
and they’re all over the place, physically distant, and too often siloed. This
is a first principal, universal truth. And this is why it’s so hard to keep up
with the pace and scope of the metaphorical lions which, contrary to the
popular song, don’t sleep at night (they’re too busy keeping you up.)
Recognizing this, what’s a great leader to do?
First off, accept
the basic truth that this is just the way things are. No amount of
reorg-ing, incentivizing, agiling, design thinking, change management, or
outsourcing is going to undo this truth. At some point, to act quickly, the
sensors, absorbers, thinkers, deciders and actors need to be brought together.
Next, convene
that group and equip them to join
forces in executing all of the SATDA functions as part of a focused, non-linear
effort, all at once: Get them in the same place; Orchestrate their interactions
so that every individual bumps into every other individual meaningfully and
repeatedly; Impose rules and roles at those collision points to diffuse
hierarchy, self-interest, and polite conflict-avoidance; and weave those
interactions together within a closed network. Just like neurons in a single
brain; like your brain, when you saw the lion and ran.
When you’ve done this right, the result is very
efficient, human parallel processing:
·
Sensors (and everyone else) talking about what they
sense, while
·
Absorbers (and everyone else) are exploring both good
and bad implications, while
·
Thinkers (and everyone else) are developing ideas and
weighing options, while
·
Deciders (and everyone else) are choosing and
developing the best options, while
·
Actors (and everyone else) are building the right plan
of action.
Finally, you need to trust in and commit to the results of their effort. If you’ve done a strong job
of getting the right cross-section of people together, and if you’ve equipped
them well, they will get to a shared
understanding of the lion, clarity on what has to happen, and alignment on the
importance of making it happen. You need to share in their shared understanding
and their clarity, and you need to make the resulting action plan top priority.
For this reason, to truly believe they’re right, you need to go back a step and
add yourself to the group while they’re figuring things out, not after.
When there is strong alignment and mobilization
amongst the Sensors, Absorbers, Thinkers, Deciders and Actors (and you!), the
lion won’t stand a chance.
CAVEAT: This
approach won’t literally get you to action in the ‘blink of an eye’; you’ll
need a few days of shared effort and a few weeks to get going on
implementation. Which, on second thought, really is the organizational equivalent
of the ‘blink of an eye’.

David Komlos and David Benjamin are co-authors of CRACKING
COMPLEXITY: The Breakthrough Formula for Solving Just About Anything Fast (Nicholas Brealey; May 7, 2019).
They are CEO and Chief Architect of Syntegrity, where they apply
the formula to help leaders rapidly solve complex challenges, generate strong
buy-in, and mobilize people for action.