Tania
is a brilliant CEO of a super successful accounting firm. Carlos, her VP of
operations, is a bright and solid asset to the firm. But sometimes Tania and
Carlos clash big time, especially when Tania wants faster results and shorter
timelines on client projects. Then Carlos slows down—fast results to him mean
poor quality and possible problems in client care, which he also owns. So as
Carlos gets more cautious, Tania gets more impatient and massively triggered.
She feels unsafe and starts to micromanage Carlos, who then rebels, feels
unappreciated, and grinds to a halt. He will not make a client-facing mistake.
Period.
Tania
and Carlos want the same thing: high-quality work delivered to clients in a
timely manner. But they both have needs
that they need to tune into: Carlos’s is safety, and Tania’s is safety and
mattering. When Carlos’s needs aren’t honored, he cannot take action. When
Tania’s needs aren’t honored, she feels devalued. As a result, projects are
delayed, and unhappy clients call Tania, who then gets more upset. She and
Carlos lose even more trust in one another, and Tania feels unsafe selling more
client engagements because, what if they are delivered late? 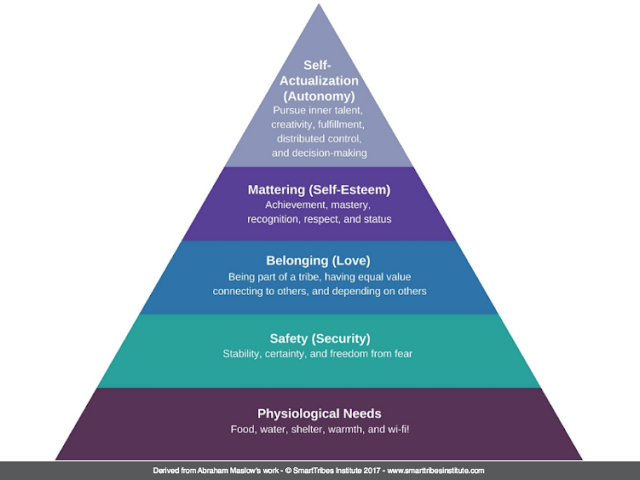 The
team
gets confused and thinks, “Wait a sec! We have these huge leaderboards
showing our sales, quality, and client deliverable deadlines. So why are we
selling less? Delivering late? Questioning quality?” Half of the team goes into
panic and fight or flight, while the other half freezes. They’re all in what I
call Critter
State—the reptilian/mammalian brain hijack where a person reacts from fear
versus choice.
This
scenario is a perfect example of the big negative repercussions a business can
experience when leaders’ needs aren’t honored. Although Carlos and Tania wanted
the same thing, their individual needs were slightly different, and they made
different negative meaning when these conflicts arose. As a result, client
relationships were at risk, the team lost confidence and panicked, and the
drive for sales decreased.

What Kills Your Performance Can Ultimately Catapult It

What
happens inside you when someone you’re counting on drops
the ball? Do you crave safety as Carlos does? Or safety and mattering as Tania
does? Or something else?
For
Tania to become more emotionally
agile, she needed to first identify the core “right” she felt she didn’t have
that was throwing fuel on the behavioral fire. Then she needed to raise her
overall behavioral baseline so that she could gradually respond from choice
rather than compulsively reacting when a trigger event occurred. That way,
Tania could create an environment where she experienced more control,
confidence, and support—in comparison to her current world of chaos fueled by
excessive controlling and constantly mistrusting Carlos.
To
achieve this, I coached her to determine which Organismic Rights[i]  she felt weren’t being met. Organismic
Rights are our basic human rights that are established during our early life
experiences. They determine where a person will have behavioral struggles as
they move through life. Put simply, like all of us, Tania had her own set of “growth
areas” to work on. They were governing her behavior and hindering her
performance—and she was totally unaware of them.
Until
Tania and Carlos were appreciated as human beings doing the best they could, they
would continually be triggered by one another, and the business would suffer.
Imagine
a newborn baby entering the world. He or she is forced to adapt quickly. The
psychoanalyst Wilhelm Reich observed a series of stages through which all human
beings must pass on their way to full body maturation, referred to as Organismic Rights. The more fully
developed they are, the more that individuals can express themselves with
greater aliveness and creativity (what I call the Smart
State, where all 3 key parts of our brain are working together and we have
behavioral choice). The less developed, the more likely they will operate in
the Critter State.
The Five Organismic Rights are these:
1.
The
right to exist
2.
The
right to have needs
3.
The
right to take action
4.
The
right to have consequences for one’s actions
5.
The
right to love and be loved
Organismic Rights Behavior Decoder
Note
that you can use this on yourself or with others too. For example, if people
are struggling with accountability, they may need help increasing their right
to take action. If they often blame others for their shortcomings, they may
need help with the right of having consequences.
Now
that you see how certain behaviors may reveal some minimal Organismic Rights, please
take a moment now and rate your organismic rights from 0-5 where 5 is the
highest experience of this right.
1.
Your
right to exist: ____
2.
Your
right to have needs: ____
3.
Your
right to take action: ____
4.
Your
right to have consequences for your actions: ____
5.
Your
right to love and be loved: ____
Consider
your ratings. Where would you like to increase your rights?
Tania
and Carlos now have a powerful, healthy, high communication collaboration based
on honoring both of their needs for safety, belonging, mattering and their
Organismic Rights.
Regarding
Organismic Rights, where do your key stakeholders at work stand? Your family
members? Now revisit the table above. How would you like to help yourself and
others to modify their behavior and increase their Organismic Rights?
[i]
Wilhelm Reich, Character-Analysis:
Principles and Technique for Psychoanalysts in Practice and in Training,
translated by Theodore P. Wolfe (Orgone Institute Press, 1945)
Christine Comaford, author of Power Your Tribe, has been a
leadership and culture coach for the past 30 years.  She has also built and sold five companies
with an average ROI of 700 percent.  A sought-after
speaker and lecturer, she is a corporate consultant to mid-sized firms and the
Fortune 1000, a leadership columnist for Forbes.com, and The New York Times bestselling author of Rules for Renegades and SmartTribes.
For more information, please visit www.PowerYourTribe.com.