In
1965, when I was a junior in high school and sporty, stylish and innovative
cars were all

the rage, Ralph Nader, a Harvard trained lawyer, published a
book that was both highly controversial and highly influential.  The book
was called, Unsafe
at Any Speed: The Designed-In Dangers of the American Automobile, and
after much persistence and lobbying by Nader, resulted in the establishment of
a new government agency, the National Highway Traffic Safety Administration to
oversee and regulate automobile design and manufacturing safety.

The
Chevy Corvair, a unique rear engine US automobile that became the poster child
for poor automobile safety and design, was just one of the many cars Nader and
his team researched in order to highlight the dangers of automobile design and
manufacture.  As a result, many of the modern safety features that are
common place in cars today, like airbags, seat belts and collapsible steering
wheels arose from this early consumer advocacy work. Over the past 3 decades, automobile
deaths have dropped significantly due the leaders of the automobile industry taking
more responsibility for improvements in safety design and manufacturing
practices.
And
here’s where our auto design safety analogy comes together with my thoughts on
leadership.
While
leadership can confer ever-increasing levels of power, authority and
compensation, it also carries with it greater and greater responsibility, just
like automobile manufacturing. Not just their responsibility to shareholders
and Wall Street, but to multiple stakeholders who buy the products and
services, to the communities the business resides in, and perhaps most
importantly, to the employees and workers. In fact, if you believe in the
importance of the Johnson&Johnson
company credo as a guideline for business excellence and sustainability,
then customers and employees are first on the list, with shareholders last.
I
am not advocating for another government agency (my personal belief is that
there is already far too much government regulation), but I do believe strongly
that leadership needs to carry with it more than just a title, a larger office
and a bigger pay check. Leadership is a responsibility!
If
leadership appointments come with big responsibilities, then employers and
senior executives have to come to grips with how they train, develop and equip
employees for leadership roles inside their company.  And if you talk to
almost any senior executive, they will tell you that most internal (and many
external) leadership trainings, workshops and seminars don’t work! These may be
incremental in helping improve a person’s knowledge and information about
leadership, but rarely do they deal with the two fundamental foundations of
effective leadership that is “safe at any speed”; CHARACTER and
COURAGE.
Effective
leadership has more to do with character and courage than with IQ or business
degrees. Many highly effective leaders who took their responsibilities to heart
never attended a leadership course. Leaders who changed things for the better,
like Martin Luther King, Gandhi, Mother Teresa, Andrew Carnegie, even Ralph
Nader, made an impact through their character and courage and not their degrees
or leadership course diplomas.
Nader’s
book was instrumental in changing things because it raised awareness to an
important issue.
“The book had a seminal
effect,” Robert A. Lutz, who was a top executive at BMW, Ford Motor, Chrysler
and General Motors, said in a telephone interview. “I don’t like Ralph Nader
and I didn’t like the book, but there was definitely a role for government in
automotive safety.”
So
how do we in business put Character and Courage as an important issue in
improving leadership at all levels inside our organizations?  Do we hire
for character, or just for skills and experience and hope character comes along
for the ride?  Do we have leadership development scenarios for aspiring
leaders at all levels that require courage to effectively solve?
When is the best time to start to develop character and courage in our up
and coming employees, supervisors and managers?  When was the last time
your CEO gave a talk to new employees about character and courage?
Why
am I so focused on character and courage as absolute foundations for effective
leadership at all levels?  Besides the fact that “it’s the right
thing to do”, many of the problems that result from internal politics,
toxic corporate cultures, waste, pollution and unsustainable business practices
could be more easily solved by those in positions of leadership who had real
backbones made of character and courage.
I
just read a collection of papers written by Andrew Carnegie and compiled into a
book entitled The
Empire of Business. It contained one fascinating article on
advice for young people starting out in business. The thoughts would make a
great leadership foundations class! Another great read about character and
courage as foundations for leadership and success is I Dare
You, a small book by William H. Danforth, founder of the
Ralston-Purina Company, written in 1931 as a model for living a life of
character and courage.
The
foundations for a great life, a great family, a great company, and a great
country are Character and Courage. That’s Leadership!
Courage
without Character is dangerous activity.
Character
without Courage is just wishful thinking.
John R Childress is the former co-founder and
CEO of the Senn-Delaney Leadership 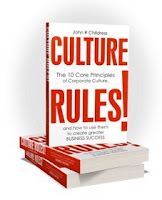 Consulting Group (now a part of
Heidrick&Struggles) and brings over 35 years of experience advising CEOs,
Boards and senior teams in multiple industries. Many of the thoughts contained
in this article are explored further in a new book by John R Childress, CULTURE
RULES! The 10 Core Principles of Corporate Culture and how to use them to
create greater business success. You can find out more about John R
Childress at www.johnrchildress.com.