Leadership is a
fascinating quality. There are countless articles, studies and opinions about
what makes good leadership. But, no matter *how* you develop and act out your
own leadership qualities, there will always be two sides: A private,
individualistic view, and the view the public and your team sees.

Let’s take a
look at leadership on two levels: leading yourself and your team.

Self-leadership
may begin as a private matter, but it quickly moves to public view, and is
evident in moments as clear as the shallows in a placid lake.

When you see
it, you marvel – someone creating music no words can describe; a master
craftsman doing with ease what mere mortals could never do; or a leader,
intuitively uttering the right words with perfect timing.

Character,
although difficult to discern from a distance, always reveals itself up close.

If you look
carefully, you can often catch glimpses of a leader’s character on full
display. It is in those moments we are both inspired and challenged to raise
our own game.

When we see the
highest form of leadership in action, we are filled with the promise of our own
potential to become a servant leader. Is there anything more amazing to
witness?

These marks of
the servant leader are not the domain of superheroes. However, when we witness
them their effect may closely resemble super powers.

These are the
moments every leader must strive to master…
·    We
want to seek wisdom when the world has decided a sound bite will do.
·    We
want the audacity to expect the best in the most difficult of circumstances.
·    We
want the ability to accept responsibility rather than blame others.
·    We
long to do what is right without thought of personal costs.
·    And,
more than anything else, we want to consistently put others ahead of ourselves.

These are the behaviors, even habits, we want and need to cultivate in our own
actions. It is our success here, in these moments that matters most.

Only when these
behaviors are harnessed and hotwired into our very soul, their power now under
our control…

Then, and only
then, does the servant earn the opportunity to become the leader.

Building Your Team to Change the World

As a leader
works to master his or her moments, the leader must also work to inspire
greatness in the action of his or her teams.

Great teams are
the stuff of legends. Throughout history, people coming together, pursuing a
common goal have, time and time again, made the inconceivable believable.

And many of you
have been on a team that accomplished great feats and changed your world.

Now, it is your
turn. You are the one who can build the team.

When teams are
at their best, there is nothing like them. When they flounder in dysfunction
and poor leadership, their pain is palpable. A poorly led team is a colossal
waste of time, talent, energy and opportunity.

That is why
teams must be led well. A place where performance soars and potential is
realized. A place where talents are celebrated and dreams come true. Does this
sound like your team?

Of the tasks a
leader will ever undertake, none may be easier to say and harder to do.
Although the time and energy required can be staggering, the effort pales in
light of the possibilities.

There is
something in all of us calling out to be part of something bigger, some thing,
or place, or team, where our talents can be leveraged, our passions can be
channeled and our sense of contribution fulfilled. That place can be your next
team. 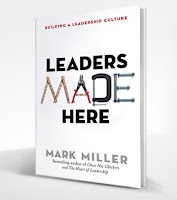 Mark Miller is
the best-selling author of 6 books, an in-demand speaker and the Vice President
of High-Performance Leadership at Chick-fil-A. His latest book, LeadersMade Here, describes how to nurture leaders throughout the organization, from
the front lines to the executive ranks and outlines a clear and replicable
approach to creating the leadership bench every organization needs.