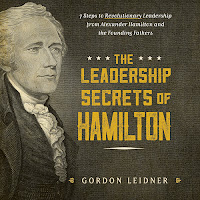 Alexander
Hamilton and the Founding Fathers have made a splash in the news recently,
thanks to Broadway’s sensational production “Hamilton.” The modern hip-hop and
R&B musical highlights the leadership of Hamilton, Washington, and other
Founders during our country’s revolutionary beginnings.  This brings to mind two questions: “Were the
Founding Fathers really the great leaders they are claimed to have been?”  If so, “What can we learn from them?” Let’s
look at the facts:
ü
Facing
the opposition of King George III, leader of the most powerful nation on earth,
the Founders declared American independence and defeated the king’s formidable
armies with a military force that general George Washington described as “half-starved
and always in rags.”
ü
In
a world where the rights of a monarch or a privileged few were all that
mattered, the Founders resolved to establish a new nation based on the
proposition that “all men are created equal.”
They fearlessly accepted the risk of being hanged for treason and signed
their names to the Declaration of Independence.
ü
In
spite of the fact that every previous democracy had failed, the Founders
created the world’s first surviving democratic republic which effectively
balanced power between thirteen independent states and all three branches of
their new federal government.
Most people
recognize the Founders as “revolutionary” leaders, but leadership theorists
have a more descriptive term for them.
The Founding Fathers, such as Alexander Hamilton, George Washington,
Thomas Jefferson, James Madison, Benjamin Franklin, and John Adams are seen
collectively as “transformational” leaders.
Transformational
leaders are the ones to call on when you need significant change.  They are unique because they don’t just point
the way to a goal, keep a project in the black, or manage day-to-day activities.  They envision significant change and define
it as “the right thing to do.” They exemplify moral integrity.  They create appropriate goals, are honest and
vulnerable with their followers, and establish an environment of trust.  They are followed with loyalty and respect.
Because transformational
leaders define the right thing to do and lead with integrity, their followers are
frequently motivated to do more than they originally expected to—and often go
“above and beyond.”  Followers become
leaders in the cause.  When the going
gets tough, they continue to persevere and make sacrifices toward the common
goal in spite of personal difficulties or hardship.  According to leadership theorist James MacGregor
Burns, transformational leaders and followers “raise one another to higher
levels of morality and motivation.”
The Founding
Fathers utilized various leadership techniques, but for the purposes of this
article we will focus on three fundamental strategies for transformational
leaders.  These strategies were intrinsic
to the success of the Founding Fathers well over 200 years ago, and they are
equally essential for aspiring transformational leaders today:
1. Exemplify moral integrity

Although George
Washington was an experienced military leader, it was his unquestioned moral
integrity that led Congress to appoint him Commander-in-Chief of the
Continental Army in 1775.  Long before he
was chosen for this command, he had earned the trust and respect of all American
citizens.

It is
impossible to be an effective transformational leader without the trust,
loyalty, and respect of your followers.  To
achieve this, a leader must start with honesty.
Honesty can be demonstrated in many ways, including one that people are reluctant
to follow—admitting personal weaknesses.
Fearing loss of respect, a leader may believe that it is advantageous to
hide his or her faults.  But admitting weakness
not only encourages the respect of followers, but it also helps to establish an
environment of trust, which is a key action for turning followers into leaders.

2. Go beyond self-interest
After they decided
to form a new nation based on the proposition that “all men are created equal,”
the Founders boldly proclaimed their reasons for rejecting the king’s rule, and
wrote the Declaration of Independence to describe their vision of democracy.  Then, despite a powerful British army only a
hundred miles away, they demonstrated their willingness to go beyond their own
self-interest for the good of others, and signed their names to the
proclamation.

Transformational
leaders today must first define their most important task.   It must
be something of lasting importance their followers will recognize as beneficial
to other people as well as themselves. The transformational leader must be
willing to put his or her “skin in the game,” and demonstrate how others will
benefit at least as much as, and ideally more than, the leader will.
3. Respect your people

After the
United States Constitution was accepted by the Continental Congress and sent to
the states for ratification, the Founding Fathers were surprised by the adverse
reaction of the people.  Where, the good
citizens asked, were their “rights as citizens” defined?  James Madison respected this request from the
people and led the effort to generate a bill of rights—which were added in the
form of the first ten amendments to the Constitution.

There are many ways today for transformational leaders to show respect
for their people.  Ideally, they should
try to develop personal relationships with as many of them as possible.  They should treat followers as individuals,
and attempt to understand their values, aspirations, and beliefs.  Finally, transformational leaders should find
ways to challenge their followers intellectually, and develop methods of
integrating followers’ personal goals with the group’s goal.
So, a return to
our original questions yields two answers: yes and yes.  The Founders were not only great leaders in 1776,
but are still worthy of emulation by aspiring leaders today.
Gordon Leidner has over thirty years of management and
engineering experience in the aerospace and IT industries, and an advanced
degree in Applied Management.  An author
of many books and articles on American history, his latest book, The Leadership Secrets of Hamilton: 7 Stepsto Revolutionary Leadership from Alexander Hamilton and the Founding Fathers.  For more, go to greatamericanhistory.net.
« Free Individual Development Plan (IDP) Template
Three Ways a ‘Noble Goal’ Makes You a Significantly Better Leader »
AFTER ENTRY