When it comes to defining their vision, leaders tend to fall into two
camps. Camp one can clearly articulate a mountain top they want to reach, but
create zero clarity on how they’re going to get to that mountain top. Camp two
has their mountain top defined and they also have a step-by-step guide to get
from where they are today (base camp) to their mountain top.

Both camps fail to create sustained motivation in their people. Camp one
fails because they haven’t defined base camp so some of their team will draw
their own conclusions about the likelihood of getting from base camp to their
leader’s mountain top and give up because they feel it is unreachable or
unsustainable. Camp two fails because their team feels no connection to their
plan and while they may go through the motions of following their leader’s plan
they aren’t fully bought in.

To create buy-in and sustained motivation in your team for executing
your vision make sure you:

Humans are story-based creatures. On the negative side this causes your
team to take a snippet of information, which may be inaccurate to begin with,
and weave an entire novel-length story that they will share with their
colleagues. On the positive side this enables leaders to create buy-in by
weaving a story that each member of the team can identify with in whole or in
part.

Using those questions you can weave a story to share with your people
that will create more buy-in than any slide deck filled with statistics.

Without a clear definition of where your organization is today your team
may not even be able to see the mountain you want to climb much less the
mountain top. This isn’t permission for you to lower your goals, but it is a
warning that unveiling your ultimate mountain top to your team (e.g. pivoting
your business model from transaction-based to subscription-based with an
entirely new set of customers) may cause decreased motivation and turnover.

3)    Define
waypoints to the mountain top

Years ago I set a really stupid goal, which was to triple my business in
12 months. The goal wasn’t stupid because of the mountain top. It was stupid
because my response to “how ya gonna get there” was “I’ll figure it out.”

Winners don’t “figure it out” they at least have a clear mountain top, a
clearly defined base camp and defined waypoints (camps 1-X) that will indicate
they are on the right path to achieving their goal.

Defining your waypoints will give your team comfort in having smaller
targets to reach on the way up your mountain and create sustained motivation
because their next destination isn’t too far away.

4)    Co-create
the path between camps with your team

Humans have a preference for editing over creation. Give your team a
complete step-by-step guide from base camp to the top of your mountain and
they’ll spend time editing it instead of executing it.

Instead, share with your team your mountain top, base camp and waypoints
and challenge them to create the path to the top. You’ll likely discover that
they have more effective or efficient ways of achieving your vision that you
could have come up with on your own, and because they were involved in creating
the path, your team has greater buy-in.

Great leaders not only have great vision they can clearly articulate the
vision from where their organization is today to where they will it to be, but
they also create buy-in and sustained motivation in their team by lowering
their anxiety about stretching to achieve their vision and enrolling them in
creating the path to their mountain top.

Hamish Knox is author of CHANGE
THE SANDLER WAY:  Understanding The Human
Dynamics 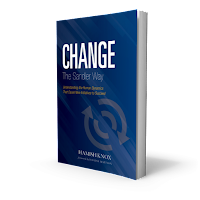 That Cause New Initiatives To Succeed.  He currently heads a Sandler Training Center
in Calgary, Alberta, Canada. For more information, visit www.sandler.com/resources/sandler-books/change.

« Great Leaders Embrace Innovation, and Innovation Demands Risks
How Adversity Affects the Backbone, and Soul, of a Leader »
AFTER ENTRY