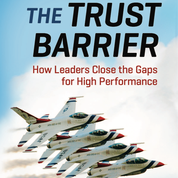 Any man or woman you
hire will come on board with a measure of uncertainty.  They’ll step in
wondering just what kind of commitment they can expect from you, and many will
wonder if they can measure up to the standards on your team.  Commitment
is a foundational requirement for loyalty, and loyalty for trust.  When
you help them come up to speed with the technical standards, and give them a
leg up on gaining social acceptance of your team, you’ll build a strong
foundation of commitment.  But even when you fill those gaps and help them
gain organizational traction, many will still carry self-doubts.  When
those situations flare, your words will further their confidence like nothing
else can.  I learned that lesson as a new fighter pilot taking my first
steps into one of the most unforgiving environments in the world – my first
operational fighter squadron.

A little humble pie over Turkey.

The weather was bad and our formation of four jets was forced to fly a pretty
complicated instrument procedure into our deployed location at the far end of
the Mediterranean. While each pilot was flying his own approach, we were also
charged with maintaining a position two miles behind the jet in front of us. I
took pride in flying a smooth jet, but that afternoon I got caught up in the
bevy of tasks, and my usual precision seemed to unravel into out-and-out
flailing.

I flew one of the worst approaches of my life, weaving left and right of course
and it felt like I was moving the throttle continually from stop to stop. I
managed to get back on the ground safely, but the effort really made me
question my own competence. I was brand new in the unit, trying to establish a
little credibility, and those moments of seeming incompetence were weighing
heavily on me as we touched down.

As soon the van picked up the four of us, the other three pilots jumped into an
animated conversation. “I got to tell you boys, that was one of the worst
approaches of my life. I was all over the sky and never did settle into a
smooth rhythm — It was mighty ugly!” Bill “Blaze” Binger said it so
matter-of-factly that his words began to lighten my load. If someone with his
experience and reputation could fly a bad approach, then maybe I wasn’t so bad
after all. I knew it really was a one-off for me, but if he hadn’t made light
of his own performance, that approach would have haunted me for weeks.

That night, I thought back on the fact that Blaze had been right behind me throughout
the approach. He could have seen my every bob, weave, and change in airspeed
with his radar, but there wasn’t even a hint of sarcasm in his voice. To this
day, I don’t know if he was really talking about himself, or if he was trying
to let me know that even the best fall short every now and then.

When your own standards are high, even small failures can seem
disproportionate, whether you’re looking at yourself or at someone else. If
Blaze’s words were directed at himself, then he set the bar high for honesty.
If they were directed at me, he had re-enforced his commitment to my growth by
letting me know that everyone has a bad day. Somehow he managed to accomplish
both that afternoon.

The bed down phase can be an emotional rollercoaster for new hires. Keep an eye
out, and chamber of few encouraging words when you see those doubts
flare.  When you do, you’ll build the kind of commitment in your followers
that lasts a lifetime.

Breaking the Trust Barrier: How
Leaders Close the Gaps for High Performance, is a Fighter
Weapons School graduate who went on to lead the USAF Thunderbirds and combat
group of 1,100 American airmen in the Persian Gulf. For more information,
please visit http://jvvenable.com/ and connect with JV on Twitter
and LinkedIn.