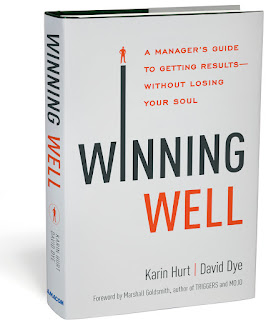 When
John needed something, he wanted it fast, and nothing made him want it faster
than when the request was coming from his boss. John, figured that the most
efficient way to get his answer and know that it was right was to text all of
his direct reports the question at the same time and ask for the information he
needed.
He’d
wait for at least two people to respond, and if they had the same answer, he’d
send it up the chain.
Each
of his employees wanted to please John, so they dropped what they were doing
and scrambled to get the answers. Which led all of them to Bob, the data guy,
all in the same ten-minute window.
Bob,
rightfully irritated, asked, “You do know three other people just asked for
that information, right?”
“Err,
nope.”
It
took a few of these fire drills before the managers realized what was going on,
and they were ticked.
They
asked each other, “Why would he waste our time like that? Doesn’t he trust us?
Doesn’t he value our time?”
After
some time spent fuming, they came up with a work- around.
When
the text came in, the first one to receive it would go to Bob, and Bob would
give everyone the same answer, which they would all forward to John.
After
receiving all the responses with identical words, John knew he’d been found
out.
Although
the managers eventually told John they didn’t appreciate the wasted effort, he
never fully understood how hurt they were by his apparent need to quadruple
verify their work.
Now
if you asked John if he trusted his team, he would say “of course.” But his
actions screamed otherwise.
HOW
TO SHOW YOUR EMPLOYEES YOU TRUST THEM
It
takes more than words to demonstrate your trust in your team. Here are several
behaviors that will help you show your employees you trust them.
1. Set audacious goals.

Oh
sure, your team may grumble, but managers who win well know
there’s no greater gift you can give your team than leading them toward
head-turning results.

Set the bar high and then tell them, “I believe in you. I know what this team
is capable of. Now let’s  figure out just
how, together.”

2. Believe in them.
We watched Sam, a manager in a small non profit, handle this masterfully
with his direct report. The organization worked to ensure water quality in
mountain streams. Laura, a free spirit who cared passionately about her people
and clean water, managed a team of paid engineers and volunteer inspectors. She
worked hard, but her team wasn’t satisfied with her performance. They wanted to
see her in the field more; she didn’t know how she could make them happy, and
she didn’t feel she was making a big enough impact in a cause she cared deeply
about. She came into Sam’s office, slumped down in a folding chair, and
declared, “I’m done.” She said she would turn in her resignation, that she’d
lost faith in her ability to be an executive.

Sam
was devastated. She was one of his rock stars. How had he missed conveying that
to her? Sam did not accept her resignation.
“You
may have lost your belief in yourself, but you have a problem,” he said.
“I
do? What’s that?”
“I
still believe in you. You can quit on yourself, but don’t expect me to quit on
you.”
Of
course, that conversation was only the start. It eventually led to Laura’s
taking a more balanced view of her accomplishments and gaining the confidence
she needed to continue her vital work.
Show
trust by believing in their capabilities.
3. Invite them to come
along.
Early
in her career, one of Karin’s first bosses, Gail, brought Karin with her to
senior-level meetings, arguing that “no one could explain it better” than she
could.

Of course, that wasn’t true; Gail was a seriously gifted explainer. She trusted
Karin would do okay and was secure enough to give up the spotlight.

We
are amazed at how many bosses are afraid to give such opportunities to their
team.

Show
trust by sharing the stage.


Show
trust by being real.

5. Encourage them to
meet without you.
A
great way to show trust in your team is to give them a big hairy problem
and ask them to meet to figure it out. Be sure to define what success looks
like. Get any information, criteria, and parameters they may need out of your
head and into theirs first—otherwise they’ll spin their wheels.


Show
trust by getting out of the way.
6. Tell them.
This
one might seem obvious, but it works. Can you imagine how
good it feels to hear, “I really trust you because . . . ”?
Show
trust by telling them why.
7. Correct and move on.
If an
employee screws up, talk about it, help her learn, and then move
on.
Show
trust by letting it go.
Isn’t
what you think or say, it’s what you do that communicates trust—or lack of it.
The best way to get your team to trust you is to trust them. Trust begets
trust. Hire for trust. Require trust. Rid your team of untrustworthy players.
Then show your team how much you trust them.