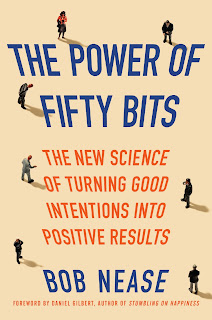 In attempting to explain the nature of physics,
Albert Einstein is quoted as saying, “Nothing happens until something moves.”  A corollary applies to our organizations:
“Nothing happens until someone does something.” We can talk all we want, but what our managers, employees, and customers do is mission critical to business
success. Perhaps more than anything, behavior matters.

For better or worse, human behavior is complicated, messy, and
unpredictable. This makes it difficult for today’s leaders to achieve optimal
performance from their teams.  Great
leaders, however, use three simple insights to understand and change the
behaviors of their key people.

If you want to understand something about human behavior, there’s
no better place to start than human brains. Each of our noggins processes a
stunning 10 million bits of information per second. That’s comparable to the
throughput of the original Ethernet cable. But an even more shocking statistic is
that the conscious part of the brain – what we think of as the mind – runs at a
pokey 50 bits per second.

To get a handle on what this means, let’s assume that a cup of
sugar represents the entire bandwidth of your brain. The throughput of your
conscious mind? It’s a measly ten grains… almost negligible.

In other words, it’s about 99.9995% true that our brains are wired
for inattention and inertia. This heavy reliance on quick twitch, automatic
behaviors served our ancestors very well 100,000 years ago, but today it
contributes to behavioral hiccups.

This isn’t meant to be an excuse or a reason to let people off the
hook.  High performance often requires
attention to detail and the ability to put effort into a project in the here
and now for a reward in the future. Nonetheless, it’s critical to remember that
people can’t pay attention to everything all the time, nor can they be counted
on to endlessly optimize every decision they face.

There are nearly as many behavior change strategies as there are
professions. Educators tell us that better behavior requires better
information. Economists argue that things will improve when we get the
incentives right. Marketers claim that cajoling in just the right way will get
things done. Each of these approaches shares a common fallacy: that people’s
intentions and behaviors go hand in hand. They all implicitly agree with the
belief that if we get people’s intentions squared away, good things will
follow.

These approaches are barking up the wrong tree because over time
inattention and inertia create a yawning and persistent gap between our
underlying intentions and what we actually do.
We refer to this chasm as the intent
/ behavior gap.

The intent / behavior gap is a critical concept because it helps
keep us from being fooled by observed behavior. If we incorrectly attribute bad
behaviors to intentions, our efforts at change will leave us disappointed and
frustrated.

Once you understand that bad behavior is often the result of
dormant good intentions rather than active bad ones, everything changes.  Instead of looking for ways to change
people’s intentions, we start focusing on strategies that activate the good
intentions that most people already have. There are two main ways to do this:
demand attention and leverage inertia.

If the problem is inattention, then one solution is to figure out
how to capture people’s scant fifty bits. For example, you can stop people in a
process and require that they make an active decision before moving on.
(PetSmart does this with its customers during the checkout process, asking
whether or not they want to donate money to help save homeless pets.) You can
also simply go to where a person’s fifty bits are likely to be; this is why
family members leave notes for each other on the refrigerator door or bathroom
mirror.

Demanding attention needs to be done carefully and wisely. One of
the quickest ways to whittle away at your ability to capture the attention of
others is to “cry wolf” too often. Let people know when you really need their
“fifty bits” – and when you don’t. Also, try to push information to people when
they need it rather than when it’s easiest to send.

The lesson: whenever possible, make the right behavior the
natural, default choice. Leveraging the natural inclination toward inertia can
be a powerful way to improve behaviors.

In every organization, behavior matters. If you
want to help your coworkers, your clients, and yourself, remember three
important insights: people are wired for inattention and inertia, there’s often
a gap between good intentions and actual behavior, and that those good
intentions can be effectively activated by demanding attention (wisely) or
leveraging inertia.


Bob Nease, PhD, is the author of
“The Power of Fifty Bits: The New Science of
Turning Good Intentions Into Positive Results” (HarperBusiness,
2016).  He is the former Chief Scientist
of Express Scripts, the nations largest pharmacy benefits management company,
and has authored and published more than 70 peer-reviewed papers. Dr. Nease is
the recipient of the Henry Christian Award for Excellence in Research from the
American Federation for Clinical Research and the URAC’s Health Care Consumer
Empowerment and Protection Award for his application of behavioral economics to
health care. He and his wife currently divide their time between Phoenix, Austin,
and a small farm in rural Italy. For more information about Bob’s work, visit www.fiftybits.com.

« New Year’s Development Goals for Leaders 2016 Edition (Added Bonus: How to Keep Them!)
Are You Using Those Fun New Technologies to Monitor, Mentor or "Motivate" Your Employees? Prepare for Sabotage »
AFTER ENTRY