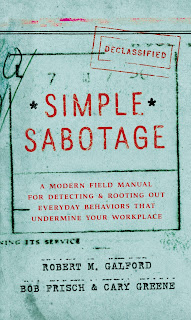 It has been hard to ignore the recent spate of stories about
the newest techniques and technologies designed to increase employee
efficiency, motivation and/or engagement. A list of workplaces from Amazon
to Zappo’s have found themselves, perhaps unexpectedly, in the midst of a
rather public discussion of the virtues, pitfalls and impact of these
approaches on the workplace.
All of these tools and programs are high-tech, high-touch
variations on the theme of getting people to work harder, work smarter, establish
goals, measure progress, share results and receive accolades, encouragement and
advice from those around them in the pursuit of ever-greater productivity. Some
people might love the way they help them gauge their efficiency on the job,
just as we have become accustomed to tracking everything from our steps to our
sleep patterns. But scores of people will likely have quite the opposite
reaction to these Fitbit-like trackers for the workplace.
Given that these new tools are unlikely to disappear any time
soon, it might be useful to consider how to protect yourself and your
organization from the unintended consequences, the damaging results or
even the sabotage that may well ensue along the well-intentioned path of
introduction or implementation. Though Newton’s third law of physics may
dictate that every action has an equal and opposite reaction, when it comes to
the alteration of employee behaviors in the workplace, the reactions and
resistance can often be disproportionately negative.  So if you or your
organization are contemplating the introduction or tools for monitoring
employees, here is a brief set of admonitions on how to avoid some of the
pain that might otherwise ensue:

1. First and foremost, anticipate the forms of emotional
resistance you will inevitably encounter: fear, skepticism and suspicion top
the list. And while some of the resistance will be overt, and therefore easier
to confront, it is the more insidious “simple sabotage”
behaviors that are harder to stop and therefore important to address.
Having studied that topic, we use that term of “simple
sabotage behaviors” advisedly here. You can see it when individuals,
seemingly operating with the best of intentions, do subtle things that slow
down progress or kill the effort entirely. For example, people could engage in
overcompliance, providing so much detail as to overwhelm the system or render
the data useless. At the other end, they could comply, but simply slow down
their responsiveness. They could also sandbag the system by providing the types
of answers they think the powers-that-be want to hear. These types of behaviors
are subtle, hard to detect, and incredibly difficult to root out once they have
taken hold.
2. Start to reduce the likelihood of those simple sabotage
behaviors by including a small heterogeneous group of employees as early on as
possible to test drive the process. Go beyond managers and your usual compliant
suspects to include some likely naysayers or cranky folks in the group (but not
too many!). Beta-test the program with one to two groups before you roll it out,
collect honest feedback and spot potential problems, and adjust as needed
before introducing it to the entire organization.
3. Be excruciatingly clear on how the program will work, how
it will help employees, what personal information is shared and with whom, what
happens to the data, how it is used, who might use it, and for what purpose. Make
all that as verifiable as possible. And then show and tell and test the hell
out of it again, whether with your initial beta groups or, ideally, with a new
set of users.
4. Be both transparent and realistic up front about how you
expect people to use the tools. If you compare this to how people have learned
to engage with Facebook, Instagram, Twitter, or any other social tool, you’ll
need to be both clear and rational about what people are supposed to do,
including their options or lack thereof, with regard to:
-participation-privacy levels
-frequency of use
-reading and responding to information and/or requests
-contributing input
-staying current and involved
5. Don’t expect it to be the Holy Grail and immediately
demand total compliance. Make sure there are other ways for people to pursue
the same goals, at least for a while, whether that’s three months, six months,
or longer. This will give you some time to work out the kinks of the new system,
and also allow people space to get used to the new program.
6. Finally, stay vigilant over time, in order to be able to
identify, isolate and inoculate against the later-stage simple sabotage
behaviors that will inevitably arise. Not all sabotage – blatant or covert –
will emerge early on. Some initially benign behaviors evolve into more
dangerous characteristics as complacency or fatigue sets in.
And give the Fitbit a rest every so often. You may have the
technological tools at your disposal, but they should not be the only tools in
your belt. Go back to some of the older ways of keeping your finger on the
pulse, or getting your exercise, or whatever it was you did before that
dazzling new technology landed in your midst or on your wrist.
Robert M. Galford is the co-author, with Bob
Frisch and Cary Greene, of Simple
Sabotage: A Modern Field Manual for Detecting and Rooting Out Everyday
Behaviors That Undermine Your Workplace (HarperOne). Robert is the
Managing Partner of the Center for Leading Organizations.  Bob is the
Managing Partner, and Cary is a Partner, of the Strategic Offsites Group.