You are here Home » change

“The
truth is that no one factor makes a company admirable; but if you were forced
to pick the one that makes the most difference, you’d pick leadership.”

You would think that given the
rock-solid evidence that organizations with great leadership
consistently outperform those that don’t that EVERY organization would be
heavily invested in the development of its current and future leaders.

However, most are not. And even if they say they are,
when you look behind the curtain, it’s mostly lip service.

It’s also hard to keep a competitive advantage a secret these
days, so again, it’s astounding to me that so many companies can’t figure out
how to develop leaders by stealing the best practices from
those that do or stumbling on proven, tried and true,
research-backed leadership development models, tools, and practices.

How can this be? In today’s hyper-competitive business
climate, why would companies ignore such a no-brainer opportunity to kick the
competition’s #%$@?

I think may boil down to three reasons:

1.
They are uninformed or just don’t believe it.

Given that I’ve been doing this for most of my career and
have made developing great leaders a personal mission, I have to constantly remind
myself that not every CEO or
executive spends as much of their time immersed in leadership development as I
do. Go figure. They have hundreds of business priorities, and everyone thinks
their pet cause is the most important
thing they should be focusing on. Also, just because they don’t “get it”, sure
as hell doesn’t mean they are idiots. Most of them are a lot smarter than you
and I.

The challenge is to get them to understand, believe in
it, and own it. When it comes to
leadership development, the
commitment of the CEO and top dogs is the #1 most important success
factor.

Unfortunately, it’s not as easy as just sending a
research report to the executive team or presenting the data to them in a 52
page slide deck. Executives are generally skeptical and have big egos, so they
need to come to their own conclusions. There also needs to be some immediate or
upcoming potential crisis to grab their attention.  Examples of crisis’s could be a lack of
candidates to fill current or future critical positions, poor company
performance, upcoming retirements, too many external hires that didn’t work
out, or dissatisfaction from the Board or auditors.

I wish I had a silver bullet, I really do. I’ve tried
everything with different executives I’ve worked for and consulted with, and
some success and some frustration. I’ll tell you, cnce
a CEO gets it, they are ALL OVER it, and everything else
is relatively easy.
2.
They don’t know how to do it.
So let’s say you’ve won over a CEO and the executive
team. They charge you with coming back to them with the “how”. In other words,
you’re tasked with coming up with a way to assess and develop current and
future leaders.

For some reason, organizations seem to think they have to
start with a clean sheet of paper and create everything from scratch, as is
they were the first and only company that had to figure out how to develop
their leaders.

When it comes to how to develop leaders, everybody has an opinion. Yes, stakeholder input is good, but do we form committees and ask for everyone's opinions when we design bridges, in order to get "buy-in"? In most cases, no, we turn to civil engineers. Otherwise we end up with a bridge that looks like this: 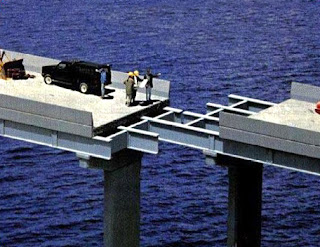 There is no need to reinvent the wheel, it’s a waste of time and shareholder money! Again, I think
it’s the “not invented here” syndrome, as well as executive egos and weak HR
leadership that perpetuates this problem.

Do your
homework and get some help. Talk to the head of HR or training in companies
that do it well, go
to a conference, do some web-surfing, work with a trusted
consultant, and/or buy
a $7.99 book. Pretty soon you’ll start to see common patterns,
models, systems, and practices. Then, draw from this body of work to create a
plan that makes sense for your organization. The “how” is relatively
straightforward – doing it well is the hard part.

Again, executive influence comes into play here. Just
because you’ve done your homework and come up with a great proposal, you still
have to convince key stakeholders that your plan is solid. Sometimes it helps
to start small, try a pilot, and take it one step at a time. Measure
your progress and adapt as you go.

Or, sometimes you need to hire a consultant to tell your executives what you've already learned. (-:

In any organization, there’s always going to be about 10%
early adopters, 80% that will eventually get on board if you can convince them
and show them how, and 10% that are just going to dig their heels in and refuse
to try anything new or different. For those, a “carrot and stick” approach is
needed. Reward the 80% that need a nudge, and punish the 10% that just won’t
budge. Of course, if it’s the CEO, then it’s time to move on and either take on
a higher priority or update your resume.

I hope this “Why, How and Won’t” framework helps in
figuring out how to get your organization started with the development of your
leaders. Good luck!
« Your Company Language- is it Driving the Results you Want?
I Get No Respect -- A Look at "Dangerfield" Leadership »
AFTER ENTRY