It’s a fair question. It seems like wherever you turn, there are horror stories of bully bosses, bad bosses, evil bosses, and devil bosses. Bad bosses are lampooned on shows like the Office, in movies like Horrible Bosses, in comics like Dilbert, and in books, blogs, magazines, and other media outlets.

There’s a lot of attention being given to “bullying” these days, and bosses are often the bully culprits in the workplace.

It’s not just some kind of anti-boss media conspiracy. A lack of respect for bosses will often show up in polls and surveys as well.

How could this be? How could so many incapable, evil-doing nincompoops end up in positions of management?

I believe these kind of bosses are the minority, not the majority. That’s not based on polls or research – only on my own personal experience in working with real managers, as well as reviewing the results of hundreds of 360 assessments.

Here’s my view of the world of bosses: 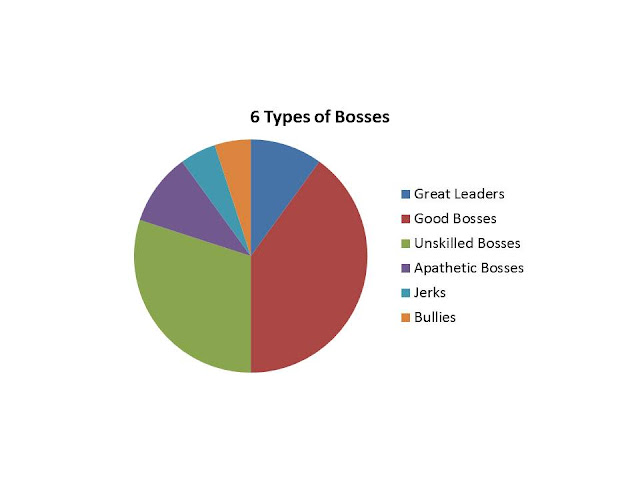 1. Great Leaders: 10%
These are those rare bosses that are able to consistently bring out the best in others and achieve extraordinary results. They are the ones that make a positive difference in the lives of their employees, organizations, and the world around them. They are not just the famous historical figures – great leaders are all around us.

2. Good Bosses: 40%
This is the bell curve of bosses: decent, hard working, well-intended bosses that strive to be great leaders – and often are – but don’t always get it right. When given feedback, they will work on their weak areas, but don’t always have the tools or support needed to improve.

3. Unskilled Bosses: 30% (sometimes referred to as incompetent)
These bosses may be new, or just never learned the basics of good management and leadership. Sometimes they had poor roles models or were never trained. They have good intentions – they are just going about it the wrong way, and get frustrated when they don’t get the results they need. With proper training, coaching, and development, they can become at least good, if not great leaders.

4. Apathetic Bosses: 10%
These are the ones that for some reason have just checked out. They may have been a good boss at some point – or at least have the potential to be a good boss – but just don’t care anymore. They don’t embrace the role of a boss – having to manage people is just a requirement of the role that they would just as soon not have to do.

5. Jerks: 5%
“Jerks” is a subjective assessment, and everyone has their own level of tolerance when it comes to the imperfections of others. Mine just happens to be around 5%, not just for bosses, but people in general.
Jerk bosses are just jerks that somehow got promoted when they should not have. Sadly, most jerks don’t know they are jerks. In fact, these are some of the bosses who think they are great leaders. They will take a good management or leadership concept, and screw it up in practice. Unlike unskilled bosses, I’m not sure if any amount of training or coaching will make enough of a difference to overcome being a jerk.

6. Bullies: 5%.
Bully bosses, like jerks, were probably always mean-spirited people but got promoted because of their hard work, technical talent, and their ability to manipulate, intimidate, suck-up, and get short-term results. In a position of power and authority, they have even more ability to push others around and make the workplace a living hell for those unlucky enough to work for them.

These last two categories are the ones we read about the most. If you search “types of bosses”, you’ll  find a lot of articles written about different variations of these last two, but not much about the other 90%.

I think the percentages are also dependant on people’s life experiences, their tolerance, as well as their expectations for a boss. For example, if you’ve never been a boss, are fiercely independent with little respect for anyone in a position of authority, you’d probably rate ANY boss as incompetent at best.

So why are do many surveys should that 50% or more employees have an unfavorable view of their bosses? Well, if you add up categories 3-6, there’s 50% right there. I also think people often have unrealistic expectations of their bosses – they are rating them against “Great Leader” standards (based on the survey questions), when in reality, that’s a pretty high bar that few will ever reach. So many from the “Good Boss” category end up getting low marks in surveys.

So what do you think? Do you agree or disagree with my categories and percentages, and if so, why?