Skip to content
There are rich leadership lessons to be learned from
politics and sports. Given that I try to avoid politics in this blog, please
allow me the indulgence of referencing a headline from my favorite sport to
make a point about leadership: 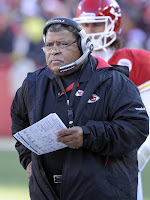 For those of you that don’t follow the National Football
League (or sports), Crennel is the Head Coach of the Kansas City Chiefs,
the worst team in
the NFL right now. He recently decided he needed to relinquish his duties
of calling the plays on defense in order to focus on his Head Coaching duties.

In response to this headline, a former player (I didn’t
catch who it was) was asked on a sports talk radio show “Why do so many great
Coordinators make such lousy Head Coaches”?

I thought his answer was simple but  brilliant, and gets to the heart of one of the
biggest and oldest mistakes middle or senior managers make when they get
promoted. He said something to the effect of:
“It’s because they don’t
realize that their job is to coach coaches, not players.”
The reason they
were such great Coordinators is because they were good at motivating and
developing their players. As a Head Coach, they need to make a shift to
motivating and developing their coaches, as well as focusing on big picture
responsibilities like media and public relations, scouting, and other
administrative responsibilities.

They get in trouble because they continue to do what they
loved to do and what made them so successful – working with players. They think
they can do both – usually by working ridiculous hours and sleeping at the
office. Many of them also neglect their health and families.

Crennel is just one recent example of a Head Coach that got
himself in trouble by refusing to let go of his old job. Other examples include
Wade Phillips, Jason Garrett, Norv Turner (not fired yet, but has been), Greg
Williams, Jack Del Rio, Todd Haley, Dick Jauren, Josh McDaniels, Steve
Spagnuolo, and Mike Mularkey.

All of these coaches, besides being fired as head coaches,
had one thing in common – they were outstanding Offensive or Defensive
Coordinators. Many of them tried to combine their old jobs with their new jobs.
Some even hired new Coordinators and still
micromanaged their old responsibilities. They not only sabotaged their own
careers, but they retarded the development of promising developing
Coordinators.

OK, so now let’s step away from the world of sports of apply
these lessons to leadership in general. If you’re a middle or senior manager,
how many of you are still managing your old employees and not leading your
organization by managing your supervisors or managers?

If you’re being completely honest, I’ll bet a lot. I see it
all the time – a great sales manager gets promoted because they were great at
managing sales reps, and then works around their sales managers to try to coach
and motivate 8-10 times as many reps. It’s one of the oldest and most frequent
recipes for failure!

Managing managers is way different that managing individual
contributors. According to Charon, Drotter, and Noel, from their classic book The Leadership Pipeline, the most
important things middle managers need to do are:

3. Deploy and redeploy resources among units

4. Manage the boundaries that separate units that report
directly and with other parts of the business.

Unfortunately, while many organizations provide training for
first-line managers, not many train their managers how to manage managers.

Do yourself a favor, and learn from Romeo Crennel – fire
yourself from your former position before someone fires you from your new
position.