You are here Home » communication

In a departure from my usual policy of steering clear of politics on this blog, today’s timely guest post is by Dr. David Kantor. Actually, it's really just an example to illustrate the author's theory, so please, no political comments.

I was critical of Barack Obama during his presidential stint for two faults. I don’t mean this guest post to be a political diatribe in any way, I’d simply like to illustrate how structural dynamics thinking can be used as a framework at all levels: the soccer team, the family, the multi-billion dollar corporation, and the nation. I argue, that ultimately, understanding SD theory can help leaders navigate, make progress, and bring people together, in the room. It’s about being honest to your self and your team, by knowing how you communicate and think, and learning how these preferences are perceived by and affect others.

During his presidency, I nearly asked a dear friend to give Obama my latest publication Reading the Room—not for publicity, though of course that could never hurt. I truly believed the two major failings keeping him from winning a re-election could be uncovered by structural dynamics. These two criticisms were the inability to come up with a cohesive and coherent narrative purpose for the American people, and second, the idealistic moral commitment to participatory democracy.

Structural dynamics analysis is premised on the claim that one’s behavioral profiles can describe one’s typical communicative actions in group settings—think nation, family, and team—in both low-stakes and high-stakes situations. In my latest work, I analyzed Obama as a mover from the bystander stance, an action stance well suited for a diplomat as it gives a greater repertoire of response than those who might be stronger movers, followers, and opposers, the remaining three action stances that comprise the Kantor Four Player Model™. 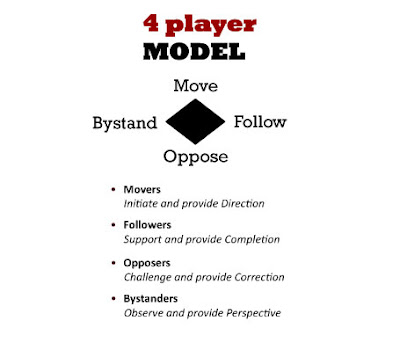 Bystanders take in information, internally synthesize, and assess before adding their own two-cents, which often adds perspective or bridges opinions. His behavioral profile also includes his preference for the domain of meaning (rather than the other structural dynamics languages of affect and power) and the open system.

All of SD theory’s stances, domains and systems cannot be defined in a guest post such as this. But Barack Obama’s preferences for the domain of meaning and the open system, cultivated by his childhood and relations throughout his life, explain his commitment to speaking and thinking about making a difference (the meaning preference) and the faith he has in encouraging all to express their opinions, no matter the pragmatic issues at hand, like upcoming deadlines (the open system preference).

To the media, and in turn to the public, these preferences are negatively seen to describe Obama the bystander as distant, Obama the speaker of meaning as too intellectual, and Obama the leader operating in open systems as inviting debate and stubbornly seeking consensus from active debate, when the strategy across the aisle was to deliberatively deny and undermine all these efforts.

Now, only a few months until the election, the question is what has changed if anything? Has he come up with a coherent narrative resonant with the American public?

Has Obama been able to tell a story like Reagan and Roosevelt, relinquishing media impressions of distance and of ivory tower talk? I think not. And I think it is obvious now that his image of an ideal participatory democracy is battered. Having started to fight back and play the same game, is it dangerous? If anything, it is awkward. Obama’s preoccupations with fighting has gotten—now, unfortunately and appropriately written in past tense—in the way of creating a clear policy based on narrative purpose.

David Kantor, Ph.D., is a systems psychologist, organizational consultant, and clinical researcher and author of Reading the Room: Group Dynamics for Coaches and Leaders  Kantor was formerly the head of Monitor Kantor Enterprises (MKE), a business unit of Monitor Group. Kantor has been a professor at Harvard University, Harvard University Medical School, and Tufts University Medical School. He also founded and served as director of the Kantor Family Institute, a postgraduate training center in Boston, and The Kantor Institute, a training center for consultants, coaches, and leaders.
« The September 2012 Leadership Development Carnival NFL Kick-off Edition
Which will get you Promoted to CEO: Nasty or Nice? »
AFTER ENTRY