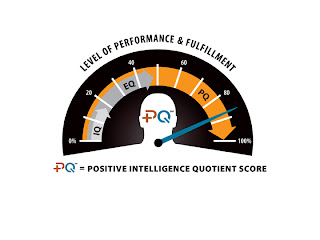 Daniel Goleman made a compelling and accurate case nearly two decades ago that Emotional Intelligence (EQ) was more important to leadership effectiveness and performance than IQ. But most attempts at increasing EQ have resulted only in temporary improvements. The reason is that a more foundational and core intelligence has been ignored, which is a pre-cursor to high EQ. In my lectures at Stanford University, I define this as Positive Intelligence (PQ). Without a solid PQ foundation, many of our attempts at improvements fizzle due to self-sabotage.

Your mind is your best friend, but it is also your worst enemy, involved in self-sabotage. To illustrate, when your mind tells you that you should prepare for tomorrow’s important meeting, it is acting as your friend, causing positive action. When it wakes you up at 3:00 a.m. anxious about the meeting and warning you for the hundredth time about the many consequences of failing, it is acting as your enemy; it is simply exhausting your mental resources without any redeeming value. No friend would do that.

Your PQ is the percentage of time your mind is serving you as opposed to sabotaging you. For example, a PQ of 75 means that your mind is serving you 75 percent of the time and sabotaging you about 25 percent of the time. Compelling evidence from a synthesis of research in psychology, neuroscience, and organizational science shows that with higher PQ teams and professionals ranging from leaders to salespeople perform 30-35 percent better on average. What’s more, they report being far happier and less stressed.

I have coached hundreds of CEOs and their senior executive teams on the tools of Positive Intelligence. I take them to the frontlines of the unceasing battle raging in their minds. On one side of this battlefield are the well-disguised Saboteurs, who wreck any attempt at increasing either happiness or performance. On the other side is the Sage, who has access to one’s wisdom, insights, and often untapped mental powers. The Saboteurs and Sage are fueled by different regions of the brain. We are literally of two minds and two brains. This suggests three strategies to increasing your PQ:

Strategy 1. Weaken your Saboteurs:
The Saboteurs are the internal enemies. They are a set of automatic and habitual mind patterns, each with its own voice, beliefs, and assumptions that work against your best interest. They come in ten varieties, with names like the Judge, Controller, Victim, Stickler, Pleaser, and Avoider.

Saboteurs are a universal phenomenon. The question is not whether you have them, but which ones you have, and how strong they are. Of the executives participating in my Stanford lectures, nearly 95% conclude that they do have Saboteurs that cause “significant harm” to them reaching their full potential for success or happiness.

The great news is that you can significantly reduce the power of these mental foes. The key to weakening your Saboteurs is to identify which one you have and expose its key hidden beliefs, patterns, thoughts, and emotions. This, in effect, allows you to create a “mug shot” of your internal enemy. It allows you to identify the Saboteur the moment it shows up in your head. At that point, what you do is to just label that thought as Saboteur thought and let it go rather than pursue it seriously. To be sure, it will keep coming back, which means you will keep labeling it, and letting it go. This simple act of observing, labeling, and letting go has profound impact.

For example, notice the difference between saying “I believe I can’t succeed” and “My Judge says I can’t succeed.” The moment you label a Saboteur thought as such, it loses much of it credibility and power over you.

(Discover your top Saboteur with free online assessment at http://www.positiveintelligence.com/)

Strategy 2. Strengthen Your Sage:
Your Sage’s great wisdom and strength is rooted in its perspective: any problem you are facing is either already a gift and opportunity or could be actively turned into one. Your Saboteurs mock that perspective and cause you instead to feel anxious, frustrated, disappointed, stressed, or guilty over “bad” outcomes. Both the Sage and the Saboteur perspectives are self-fulfilling prophecies.

If you follow the Sage perspective, you get greater access to its five vastly untapped mental powers which can meet absolutely any work or life challenge without being worked up about it. There are simple and fun “power games” you can play in the back of your mind to facilitate this process.

Strategy 3. Strengthen PQ Brain muscles:
The PQ Brain gives rise to the Sage perspective its powers. Its focus is on thriving rather than surviving, which is the Saboteurs’ focus. It consists of three components: the middle prefrontal cortex, portions of the right brain, and what I call the empathy circuitry. The PQ Brain “muscles” are activated and strengthened when you command your mind to stop its busy mind chatter and direct its attention to any of your five physical sensations. An example might be to feel the weight of your body on your seat, or feet on the floor, or sensations of your breathing.

This might appear simplistic, but it is backed by a massive amount of research. Every time you attempt such a shift of attention for about 10 seconds, you have performed a “PQ rep,” strengthening the muscles of your PQ Brain. The goal is to do 100 PQ reps per day to build up and maintain strong PQ Brain muscles. This can be done while sitting in a meeting, driving, walking the dog, or taking a shower. It doesn’t need to take any extra time from your busy day. These muscles build up really fast.

Try this out. Discover your top Saboteurs and PQ score with the free online assessments at http://www.positiveintelligence.com/

Shirzad Chamine is author of New York Times bestseller Positive Intelligence. He is Chairman of CTI, the largest coach-training organization in the world. A preeminent C-suite advisor, Shirzad has coached hundreds of CEOs and their executive teams. His background includes PhD studies in neuroscience in addition to a BA in psychology, an MS in electrical engineering, and an MBA from Stanford, where he lectures.