You are here Home » CEOs

If you’re in a leadership position, you make hundreds of decisions each day – and most of those have the potential to impact the well-being of others. They are moral decisions. Don Blankenship, the CEO of Massey Coal Mines regularly made decisions to bypass safety procedures and ultimately those decisions led to the accident which killed 29 workers. On the other hand, Jim Sinegal, the recently retired CEO of Costco Wholesale, generously paid his warehouse employees. Even part-time workers receive benefits. Incidentally, Costco employees sell twice as much merchandise per square foot of retail space as their nearest competitor – Sam’s Club! He did so in spite of steady criticism from Wall Street analysts.
So, the decisions you make as a leader are nearly always moral decisions. If a decision impacts the well-being of other people, it is a moral decision.
Moral Intelligence and Universal Principles
In our book, Moral Intelligence 2.0, we define moral intelligence as our mental capacity to apply universal human principles to our personal values, goals, and actions. While cognitive (IQ) and technical intelligence are important in your role as a leader, moral intelligence is significantly more important because it directs the other intelligences and provides meaning. The implementation of moral intelligence can profoundly - and positively - impact your business.
Four universal moral principles (Figure 1), honored by people of all cultures and creeds, are the foundation for organizational success and the health of the global economy. Demonstrating integrity generates trust. Practicing forgiveness for well-intentioned mistakes is necessary for innovation to flourish. Compassion – caring for others as human beings vs. just a means to an end – has a direct impact on the retention of talent. And finally, demonstrating responsibility by admitting mistakes, and showing that you “care for the commons” – or care about “leaving the world a better place” – inspires and energizes people. “Caring for the commons” is more often known as “corporate social responsibility.”
Figure 1
Four Universal Moral Principles 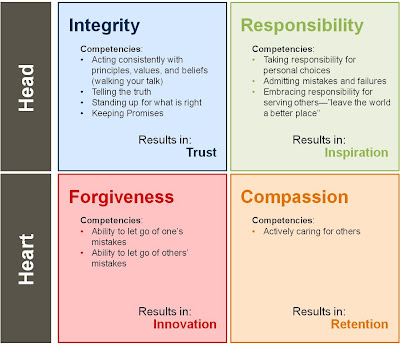 Maximizing Shareholders’ Returns
But not everyone agrees that business leaders need to “care for the commons.” After all, we’ve all been told that the primary purpose of business is to maximize the shareholders’ return over the needs of all other stakeholders. That’s the claim of nearly every analyst on Wall Street. Milton Friedman, for decades the icon of the Chicago School of Economics, also thought so. He emphatically stated this in the middle of the 20th Century. Furthermore, he was firmly against the use of corporate resources for promoting the common good:
“There is only one social responsibility of business—to increase its profits so long as it stays within the rules of the game…Few trends could so thoroughly undermine the very foundation of our free society as the acceptance by corporate officials of a social responsibility other than to make as much money for their stockholders as possible. This is fundamentally a subversive doctrine.” (Capitalism and Freedom, p 133. University of Chicago Press)

Wall Street and most corporate CEOs of public companies have embraced this view for at least the past 40 years.

So How Has This Worked For Us?

We think everyone would agree that the foundation of our free enterprise system has taken several jarring hits so far in the 21st century. The quarterly focus on shareholder return at all costs has frayed the fabric that holds the system together. Meeting “guidance” by managing earnings is the standard. “Spin” by a CEO is expected.

Many of the regulations that worked before the mid-1970’s were dismantled and several onerous new regulations have sprung up in reaction to the resulting scandals. Neither of these changes were wise moves. Both the informal and formal rules and regulations have been changed. As a result, the norms for successful commerce have been weakened.

If Milton Friedman were still alive, he would have to admit that it’s not the use of corporate resources for social causes that nearly brought down the world financial system. Quite the contrary – it was social irresponsibility – the pervasive absence of a sense of personal responsibility for the way the capitalistic system works. This is the subversive doctrine!

What Our Research Shows

In our ongoing research on the moral intelligence of CEOs, we’ve discovered that low concern for the common good leads to lower productivity and workforce engagement. Furthermore, business performance suffers. (Figure 2) 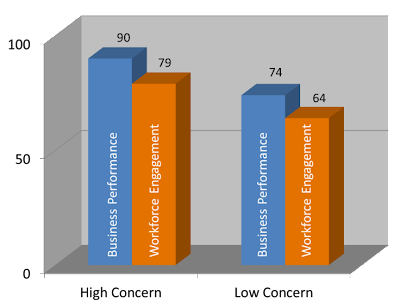 As a business leader, your decisions impact the social fabric – for better or worse.

Demonstrating personal responsibility and a concern for the common good as a leader is one of the major drivers of productivity and workforce engagement. Actual business results can, of course, be impacted by dozens of factors, but a CEO who cares only about pleasing Wall Street and demonstrates little concern for the common good will erode profits and jeopardize the long-term sustainability of the company.

Doug Lennick is the CEO and Co-founder of the Lennick Aberman Group, a performance-enhancement consulting firm that works with executives, leaders and athletes. Fred Kiel, Ph.D., is co-founder of KRW International, Inc. and brings over 30 years of experience to his work with Fortune 500 CEOs and senior executives. Their latest book, Moral Intelligence 2.0, Enhancing Business Performance & Leadership Success, offers insights into the mechanics and benefits of moral leadership and competency.
« Creating the Conditions for Sustainable Innovation
How to Get the Most Benefit from an Executive Development Program »
AFTER ENTRY