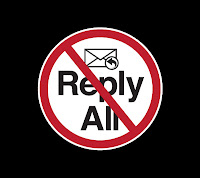 By now you may have heard about the recruiter, Gary Chaplin, who lost his job for telling a job seeker off? Well, he didn’t just tell him off – he ripped him in an expletive-riddled email and accidentally copied 4000 fellow recruiters.

The job seeker, Manos Katsampoukas, sent his resume to 4000 recruiters politely asking for a position in finance or marketing. OK, granted, that’s not a very smart job-hunting strategy. But still, did he deserve the following response — in which Chaplin said he spoke for “all 4,000 people you have emailed” — “Please f*** off — you are too stupid to get a job, even in banking.”

There are a lot of lessons to be learned by this unfortunate story, including:

1. Mass emailing your resume to thousands of recruiters doesn’t sound like a sound job hunting strategy. Better to cultivate relationships with a few in your specific industry well before you are looking for a job. In fact, doesn’t everyone hate mass emails (spam) in general? Although, there are companies that offer “resume distribution services”. Do people really use these and do they work?

2. Never forget what it’s like to be out of work and looking for a job. Many people only have to go through this once or twice in their lifetimes. They sometimes do naïve, stupid, or desperate things. Try to put yourselves in their shoes and show some compassion. Better yet, do what you can to help the person. You never know – what goes around, comes around. A friend of mine in the HR business took pride in how many of her friends she helped land jobs. When it came her turn to ask for help, people came out of the woodwork to help. She landed a new position within weeks.

3. Always assume anything you put in an a email could be shared with 4000 people. I’m sure we’ve ALL made one of these mistakes – I just did it last week. If you’ve got something sensitive to say, say it in person. Better yet, write it down, save it, read it the next day and realize how stupid it was, and delete it.

4. We all need to learn the difference between “reply” and “reply all”. Yes, they are right next to each, and sound similar, but come on – really? Having said that – mistakes happen – if someone does it, lighten up, you could be next.

Better yet, maybe the “reply all” key should be abolished? It’s just an accident waiting to happen.

5. Maybe it’s time the recruiting industry takes a good, hard look in the mirror? The industry in general doesn’t have the greatest reputation when it comes to integrity, ethics, and treating people with respect. Just read some of the comments in the story. I’m sure most in the profession are honorable professionals, but when a story like this surfaces such venom from so many people, you have to wonder.

6. Always assume anything you do in the digital world can be traced back to you. There’s no such thing as anonymity or privacy in cyberspace, even if you use a fake name.

7. When you make a lot of money and drive flashy sports cars, you get very little symphony. Although I have to hand it to Chaplin, he did admit it was a stupid mistake and apologized. Some would say he shouldn’t have even lost his job over it.

What do you think?

Thanks to my daughter, who works in pr/social media, for bringing this stuff to my attention. She helps keep me current. (-: