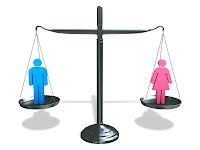 According to research from the book Why Woman Mean Business, women now represent a majority of the talent pool, a majority of the market, and better gender balance in leadership yields better corporate performance. The data is compelling:

• MARKET: Women make 80% of consumer goods purchasing decisions in the US

However, according to 20-First’s 3rd Annual Global Gender Scorecard, 90% of Executive Committee positions are still filled by men, with only 10% by women.

In order to achieve better gender balance in the executive ranks, there are many ways to go about it, including:

Both are equally important and go hand in hand.

Companies often will implement separate, often competing or conflicting strategies and goals. There’s a “Diversity” strategy driven from one office, and a succession planning and development strategy driven by another. From a manager’s view, it’s confusing.

One of the most effective ways to improve representation is through the integration of both.

It’s not that complicated to do, it just takes a boatload of commitment, most importantly, from the leader of an organization, along with the support of a strong HR leader.

At the risk of oversimplifying, here’s a 9 step process to improve gender balance through succession planning and development:

1. Train Leaders in the importance of gender balance.
This is an all-important first step; otherwise the rest could turn into a compliance exercise. Leaders need to understand the business case and practices that may be creating barriers, including their own biases and behaviors. Show them the research, engage them, and provide assessments, strategies and tools.

2. Establish metrics and goals.
There are two kinds of metrics – what I would call “end result”, or lagging metrics, i.e., percentage of female executives, managers, etc… and “activity”, or leading metrics. Many organizations just focus on the end game, often for compliance purposes, then wonder why there’s never any improvement. Instead, an organization could establish succession planning metrics, such as:

It’s important to include “viability” (defined as approval by CEO and/or HR VP); otherwise, you could end up with lists of token candidates. Here’s an example of a 2X2 grid with both variables: 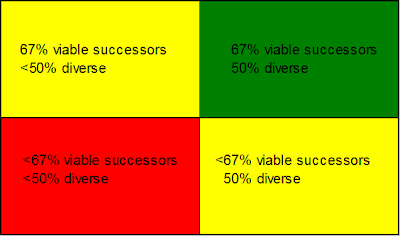 3. Tie executive variable pay to both end result (representation) and activity (2X2 grid) metrics. 10% is a good percentage – enough to drive behavior, but not enough to overshadow other key business metrics.

4. Establish “Top 10 lists” for every major business unit.
It’s expected that as an organization begins this journey, managers will most likely be either “yellow” or “red” for the first few years. So, you need to look at the next level down for feeder pools. One way is to have each organization identify its 10 top females, minorities, non-U.S., or any other category you are trying to improve. “Top 10” is a relative metric, so there should be no incomplete lists. If top 10 lists are weak, then keep digging deeper, all the way to the entry level recruiting process if necessary.

5. Allocate development resources to female candidates.
An example of this would be to mandate that ___% of slots in an organizations executive development program is filled with female succession candidates or Top 10 lists (if appropriate). Yes, this may sound exactly like a quota – and it is – but’s it’s the only way you’ll ever begin to make any progress on improving overall representation. It also has the side benefit of slowly beginning to change the culture, as diverse participants begin to shape the thinking, attitudes, and behaviors of others that wouldn’t have normally had the opportunity to interact with those that are “different”. For example, diverse “action learning” teams often produce the most creative solutions.

6. Every successor should also have an individual development plan (IDP) and a senior level mentor.
Engage high potentials in career and development discussions. It’s important not to assume that every identified “high potential” wants to be an executive. Mentors can help paint a realistic picture of the role, advantages, disadvantages, and implications.

7. Ensure that at least one diverse candidate (internal or external) is interviewed for every executive opening.
Yes, it’s the “Rooney Rule” (established in the NFL in 2003) – and it’s had mixed results – but in general, has had a positive impact. The idea is to cast a wider net, and in the process, help identify barriers that may be getting in the way of attracting and hiring the best talent.

8. Regular use of public reward and recognition.
Tying succession goals into pay isn’t enough. In order to change behaviors, there needs to be visible examples of diversity champions being rewarded and recognized. An annual CEO’s award can be very motivational. Of course, public hangings are also effective, but I’d rather focus on more positive ways to change behaviors. Otherwise, your efforts can begin to feel like a witch hunt.

9. Support newly promoted or hired candidates.
Transition to the next level or a new organization is a difficult process. It’s especially challenging for females and minorities, who could be perceived as being undeserving, especially if their development was accelerated. All of these efforts could go up in smoke if these rising stars, full of potential and promise, fail. One way to provide support is by providing the services of an executive coach for the first 6-12 months, or through participation in an external executive development program specially designed to address these unique challenges.

If you buy into the business case for achieving greater gender balance in the executive ranks (and I do), then using succession planning and development can be a powerful way to achieve that goals.

« The Perils of Hitting “Reply All”
Developing Future Leaders – It’s Imperative Not to Wait! »
AFTER ENTRY