Skip to content
Here’s the 2nd in a series of guest posts by Professor Jim Clawson, one of our Executive Development Program instructors for a custom program we offer on Leading Change.

I introduced Jim to Great Leadership readers a few weeks ago with a post called “A Four-wheel-drive Diamond in the Rough Leadership Model”.

In this second installment, Jim offers his take on the difference between managers and leaders. I’ve always thought the “leader vs. manager” debate was kind of useless, and I wrote an early post about it here. However, I absolutely love the distinction Jim makes in this post. I’ve had a chance to hear him talk about the differences between “inside-out” and “outside-in” thinking and behavior a couple times. I think it’s spot on and has had a impact on my approach to life.

Take a read, and let us know what you think.

Note: today, 10/28/2011, is the 4 year anniversary of Great Leadership. Over 500 posts, woo hoo! It’s been an awesome ride and I plan to keep doing it until I run out of ideas or ambition, whichever comes first. Hope you’ve enjoyed it.

Over the last month, I’ve participated in and observed a heated debate among academics (on-line) about the differences between leaders and managers. Everyone seems to have their own strongly held view and not much persuasion seems to have taken place. Perhaps this is an academic debate. For those striving to influence others and to make things happen, though, I offer what I think is an important distinction.

This distinction has to do with how much one lives outside-in versus inside-out. By “outside-in” I mean that one consciously or pre-consciously weighs what “they” might think before one acts or speaks. The more we adjust our behavior to fit in, the more we are living outside-in. And that’s not all bad. It is the basis for orderly society. People drive on the correct side of the road, obey most of the laws, put on clothes in public, and speak with some deference and these things and many more allow for an orderly community.

At the same time, we can imagine in addition to how much we mindfully and mindlessly conform how much we initiate fresh thoughts and behaviors based on our own recognizance. How much do we allow original thoughts? Behaviors? Approaches? Insights? A community (or nation) that rates high on conformity is less likely to be adaptive, innovative, and probably even viable.

Why? Because things change.

So, here’s the distinction I draw between leaders and managers. Both try to influence people but the underlying question is “with whose ideas?” Management (and again, it depends on how one defines the term, yes?) in my view focuses more on getting things done that others have determined, devised, and declared. Managers work toward goals, ideals, and outcomes–that others largely have set or prescribed. In that sense, while managers work hard to get others to do things, and are essential to every organization, they are living more “outside-in” than inside-out in that others have set the vision, the dreams, and the goals.

Managers tend to use what I will call “level one” and “level two” approaches. These are behavioral rewards and punishments for the former and logic and reason for the latter.

Leaders on the other hand are those who think beyond the current expectations and imagine a different emerging world. Leaders are those who see beyond current boundaries and expectations and dare to initiate stretches or changes or radical disruptions. Call it “vision” if you want, but the terminology is less important than the phenomenon–the ability to live more inside-out and less outside-in.

Of course, if one lives too much “inside-out” one might find one’s self bankrupt or in prison. There are risks. And the risks run deep because they accrue to the leader’s account not someone else’s.

Take for example Jeff Immelt’s eleven year run as CEO at GE. He inherited a company that had developed 20 years of cultural focus on fit and efficiency. Jack Welch’s determination to get the right mix and then play only in games he could win created enormous wealth. Immelt decided that doing what was good for yesterday ever more efficiently wouldn’t win the future. His emphasis on ten new technological innovative streams has yet to prove as financially successful as Welch’s legacy. AND Mr. Immelt is clearly working inside-out. There’s risk.

How much of your life do you live outside-in? That is, before you speak or act, how much do you consciously or semi-consciously think about what “they” will say? Are you willing to stretch or break current convention for the sake of a new initiative or direction? 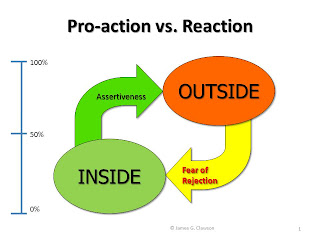 On average, where are you on this scale? If you wanted to be a leader and not “just” a manager, where should you be on this scale? That is, in your view, how much inside-out would an effective leader be? Do you habitually ask others where we should go? Or do you find yourself habitually thinking of new visions and directions. I invite you to think about this tension-balance and observe yourself over time. And to reflect on how differences in the proportions of this tension-balance might define leadership and management.

James Clawson has been a professor of Leadership and Organizational Behavior at the Darden Graduate School of Business Administration at the University of Virginia since 1981. He has consulted with dozens of large and very large corporations in various parts of the globe on issues of leadership, career management, leadership development, human resource management, organizational development, and related topics.

Author of Level Three Leadership, Dr. Clawson has helped executives and managers at all levels learn how to be more effective leaders in today’s rapidly changing environment.

Dr. Clawson received degrees from Stanford University (Japanese Language and Literature with great distinction), Brigham Young University (MBA in marketing), and Harvard University Graduate School of Business (DBA Organizational Behavior). He taught for three years at the Harvard Business School before joining the Darden School. He also taught as a visiting professor at the International University of Japan in 1991.

If you’d like to discuss having Jim work with your company, please contact Dan McCarthy, at daniel dot mccarthy at unh dot edu.