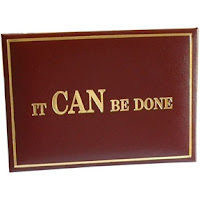 As a leader, what should the sign on your wall or desk say?

W. Clement Stone began as a shoeshine boy and became a multimillionaire. He credits his success to three words: Do It Now. He required everyone who worked for him to write those words on index cards and post them in their work area.

Over the past twenty years I have collected and analyzed many of the quotes leaders post on their office walls or keep on their desks. Many of these quotes are the guiding principle they followed to achieve success. Here are my top 15.

1. “It can be done!” —Sign President Ronald Reagan kept on his desk in the Oval Office.

Leaders are optimistic, upbeat, and positive. Reagan was known for his optimism and the ability to express ideas in a clear, eloquent, and quotable fashion.

2. “No Whining” —Sign on the desk of James Parker, former CEO, Southwest Airlines.

Victims wine and blame others. Leaders may get discouraged on occasion but never play the victim role.

3. Bill Gates had a picture of Henry Ford in his office. It was there as a reminder to not do what Ford did. Ford didn’t listen to his customers. He knew his customers wanted the option to buy cars painted other colors besides black. This “fatal attitude” caused him to lose market share to upstart General Motors.

4. “The Buck Starts Here!” —Sign on the desk of Donald Trump.

5. "Be brief. Be Brilliant. Be Gone." —Former sign on the office wall of Mark Goodman, CEO, Twist Image.

Leaders who are clear and concise are more credible and more brilliant.

Leaders spend a significant amount of time talking and listening. Advocating, proposing, nudging, selling, questioning, listening, probing and digging are what leaders do.

Michael states, "Leaders remove the clutter so their big ideas stand out."

8. Hatim Tyabji, former chairman and CEO of VeriFone, Inc. —On his office wall there was a poster that consisted of twelve blocks, each with a photo of an Irish setter. The first 11 blocks show the dog standing, not responding to a command to "sit." Finally, in block twelve, the Irish setter sits. "Good dog," reads the poster.

9. “Be Realistic, Demand the Impossible” —Sign in the office of T. J. Rodgers, founder and CEO of Cypress Semiconductor.

Leaders are demanding! They expect more than others think is possible. Leaders believe most people have underutilized talents and abilities.

Jim is president, Narrative Television Network and author of The Ultimate Gift.

Jim states, “These are people who I’ve worked with and respect. They remind me to always strive for excellence.”

11. “A desk is a dangerous place from which to view the world.” John le Carré  —Sign in the office of Louis V. Gerstner, Jr., former CEO of IBM.

Seeing the problem, touching the part, talking directly with employees and customers provides a reality you don’t get sitting in your office. We want to see our leaders directly involved in the problem like Louisiana Governor Bobby Gindal has been involved in the Gulf Oil Crisis.

Peter states, “It means don’t just say it—do it. Show us your passion in action. Leaders use the media, storytelling, and technology to foster the development of each person’s potential.”

13. “Just because it worked once, doesn’t mean it will work again!” —Sign on the desk of Shaun Coffey, CEO, Industrial Research Ltd., New Zealand.

Shaun states, “Every situation is different, and this is particularly so when dealing with change. People are different, and people change. An intervention that has been spectacularly successful may not work in a new situation. It may not even work in the same company/organization again because the people will have changed as a result of the experience. Keep changing your tactics, staying aware of how people are responding. Attack from different angles. Look for signs that something isn’t working, and try something else—don’t get stuck in your ways.”

14. "The time is always right to do what is right." Martin Luther King Jr. —Sign on the office wall of Michael Jansma, President GEMaffair.com.

Leaders consistently stand up for their values and beliefs. It’s not a once in awhile thing.

15. “Leaders should be able to Stand Alone, Take the Heat, Bear the Pain, Tell the Truth, and Do What's Right" Max DePree —Sign in the office of Brian Morehouse, coach of women’s basketball at Hope College, 2006 Division III National Champions.

Brian states, “That quote covers everything a leader needs to do as they approach their day in terms of courage, integrity, focus, and perseverance. And, it closely meshes with my coaching philosophy which is –Do the right thing every day, every play, on and off the court!”

Leaders have a positive, can-do attitude. They are optimistic and believe there is hidden talent in each person. Their enthusiasm creates energy and excitement. Leaders may get down from time to time but they never play the victim role. They take responsibility. They are confident in themselves and the people around them. Many of the office wall quotes I have found relate to one or more of the following themes:

What are your guiding principles? How about posting them on your office wall. Periodically take time to think about how well you are applying your leadership principles. Solicit feedback from people you trust. Keep improving.

Paul B. Thornton is an author, and trainer. He is the author of numerous articles and 13 books on management and leadership. This article is based on his latest book, Leadership - Off the Wall

published by WestBow Press a division of Thomas Nelson Publishing. His book is available at Amazon and from the publisher 1-866-928-1240.