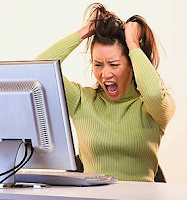 A new Randstad Work Watch survey reveals what really irks employees. did your favorite make the list? If not, go ahead and get it off your chest and add it as a comment.

My additions: swearing (particularly dropping the f-bomb), whining, finger pointing, and a lack of leadership (surprise!).

ATLANTA, May 5, 2010 – Employees would rather deal with gossiping co-workers than with colleagues who have poor time management skills, according to Randstad, a leading staffing firm and workforce solutions provider. The company’s new Work Watch survey, conducted by Ipsos Public Affairs among more than 1,000 employed U.S. adults, revealed the top three workplace pet peeves to be: people with poor time management skills (43 percent), gossip (36 percent) and messiness in communal spaces (25 percent).

The results show a slight, but interesting, shift in employee sentiment on this subject since the last time Randstad conducted a similar survey on workplace pet peeves in 2007. In that survey, gossip ranked as the biggest workplace annoyance, followed by others’ poor time management skills and messiness in communal spaces.

“The economic occurrences of the past 18-plus months seem to also have impacted what annoys people at work,” said Eileen Habelow, senior vice president of organizational development for Randstad. “Whether it is budget cuts or staff layoffs, employees are being asked to do more work with fewer resources, which directly affects how they view their time in the office. Employees are looking for ways to increase their value at work, so it would only make sense they would be a bit bothered by coworkers who they believe are having an impact on their time, and, possibly company productivity.”

Since the original Randstad survey on workplace pet peeves was conducted in 2007, social media use, whether for personal or professional reasons, has exploded onto the scene. Additionally, America experienced a presidential election and a recession, each spurring a number of political hot button issues. These events prompted Randstad to add two additional choices for respondents to consider when identifying their top workplace pet peeve. Interestingly, social media use and political conversations didn’t rank in the top six selections of respondents pet peeves. A comparison follows.

Peeves About Time Management
So what, exactly, do employees find most annoying about colleagues time management practices? The survey revealed that 22 percent of respondents listed people who take excessive breaks – long lunches, smoking breaks, online surfing – as their chief aggravation. After that, “pet peeve parity” kicks in as roughly one in ten workers named the following as their top time management frustration:

Not surprising, employees under age 35 were more likely than those who are older to say that their biggest time management pet peeve is when meetings cut into personal time (16 percent vs. 7 percent). However, 13 percent of respondents say that none of the above pet peeves bother them.

Social Media Impact
With only 12 percent of respondents saying that personal use of social media sites in the workplace was among their biggest pet peeves, it’s reasonable to say that this activity has either become a part of the “everyday” at work or that companies are now cracking down on social media use through formal policies. When asked what was most annoying about people’s personal use of social media during work hours, the top two responses were the amount of time wasted that should be spent on work assignments (28 percent) and when it causes users to ask others for help with their workload or responsibilities (20 percent). “This makes sense as both of these activities could impact a worker’s ability to manage, or not manage, their time,” added Habelow. “Just as telling is the fact the survey also found that 27 percent of respondents don’t have any concerns over people’s personal use of social media during work hours which again could be because of workplace policies or general acceptance.”

How Pet Peeves Are Being Addressed
Just as workers have a variety of pet peeves, they also tend to deal with them in different ways. In most instances, employees say that they typically deal with their pet peeve by saying something directly to the person involved (29 percent). Additionally, the survey found that very few opt to directly email the person (2 percent) when dealing with their pet peeve. The next best way for most workers to deal with or respond to pet peeves is by venting about it to co-workers (19 percent). Only 9 percent say something to their boss/supervisor and even fewer, 1 percent, leave an anonymous note or vent on a social networking site. Interestingly, more than a quarter of respondents (27 percent) stated they ignore the situation completely.

Additional findings from the survey included:

Abbreviated Survey Methodology
For the survey, a national sample of 1,037 adults aged 18 and older who were currently employed from Ipsos’ U.S. online panel were interviewed online from April 13-16, 2010. Weighting was then employed to balance demographics and ensure that the sample's composition reflects that of the U.S. adult population according to Census data and to provide results intended to approximate the sample universe. A survey with an unweighted probability sample of this size and a 100% response rate would have an estimated margin of error of +/- 3.1 percentage points 19 times out of 20 of what the results would have been had the entire adult population of employed adults aged 18 and older in the United States had been polled.

About Randstad US
Randstad US is a wholly owned subsidiary of Randstad Holding nv, a $17.7 billion global provider of HR services and the second largest staffing organization in the world. We play a pivotal role in shaping the world of work, leveraging the true value of human capital for the benefit of our clients, candidates, employees and investors.
More information is available at the company’s website, http://www.randstad.com/.

About Ipsos Public Affairs
Ipsos Public Affairs is a non-partisan, objective, survey-based research practice which conducts strategic research initiatives for a diverse number of American and international organizations, based on public opinion research. They are the international polling agency of record for Thomson Reuters, the world’s leading source of intelligent information for businesses and professionals. To learn more, visit: http://www.ipsos-pa.com/.