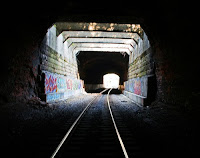 While I’m on vacation, here’s a guest post by Craig Perrin, Director of Solution Development for AchieveGlobal:

We hear the economy is on the right track. The dark clouds are lifting. Leadership is praised.

But really, wasn’t it leadership – or lack of it – that landed us in this mess?

When banks were handing out mortgages for a smile and a signature, then bundling exotic instruments with unknown global impact, where were senior leaders to put a stop to it?

When accelerators started sticking worse than gum on a shoe, where were Toyota leaders to stomp the brakes?

In my role with AchieveGlobal, which develops leadership training for organizations around the world, I helped guide recent research on key leadership questions, including: What constitutes effective leadership in the 21st century? How has leadership changed to keep pace? What are today’s leadership best practices?

Our study found that leaders have focused on financials, both before and now during the recession – with a kind of tunnel vision on the bottom-line. Asked about their top challenges, U.S. leaders selected “cost pressures,” followed by “growing the business,” and “driving sales.” Beyond that finding, three of five U.S. leaders in the study (60.8 percent) rated bottom-line business results as more important than any other leadership concern.

Regrettably, we found that this focus on financials begets lopsided leadership prone to errors in judgment and action. Take another area of leadership action: diversity. Before the recession, encouraging diversity was all the rage. But last year, when we asked U.S. leaders to rate practices in six critical “zones of leadership,” more than half (51.8 percent) ranked diversity the least important zone (with similar results in three of the four global regions we surveyed).

The many possible reasons for this result include perceptions that diversity is “political correctness” (rather than a critical way to leverage human potential), that “people at bottom are the same” (blinding leaders to the unique gifts of diversity), and that diversity, while important, is low-priority in a down economy.

Exacerbating these misperceptions, we found, is a global reluctance to reflect – defined as the leader’s skill and will to step back and ask, “What role could I be playing in the problems I’m facing?”

The poor ratings for diversity also likely reflect the fact that it’s harder to manage diverse people, that some countries surveyed (e.g. China) have very little diversity, and (let’s face it) that ethnocentrism still lives.

Whatever its causes, this result reveals a pernicious blind spot among today’s leaders about the meaning and, yes, the bottom-line value of diversity. For companies with global operations, our study does predict that renewed focus on diversity may happen sooner rather than later: these businesses identified their most pressing challenges in the broad area of diversity, notably in “creating virtual workplace structures” and “succeeding with mergers and acquisitions.”

To survive our economic maelstrom, however, leaders would do well to leverage the unique contributions of diverse people, driving innovation and honing a competitive edge in a shrinking global workspace.

Looking forward, our study revealed that long-term success will take a new leadership mindset. While business is one undeniable focus for most leaders, success in the 21st century requires leaders who can assess their own strengths and liabilities in several “leadership zones,” adjust current strategies, and adopt new strategies. Only then will they be ready for the unknown challenges and opportunities to come.

As AchieveGlobal’s Director of Solution Development, Craig is a thought leader who works cross-functionally and with clients to guide creation of a range of responses to market needs. Since 1986 he has played a central role in developing the company’s flagship programs in leadership, sales, and customer service. Craig holds a B.A. and M.A. from San Francisco State University.