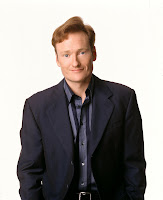 I'm not a regular "Tonight Show" watcher - it's on too late for me - but I happened to watch Conan O'Brien's final show last night. For those of you that have not been paying attention, NBC wanted Conan to give up the first 30 minutes of his show to make room for Jay Leno. He felt NBC was giving up on him too soon, after only 7 months, so he decided to walk away with a reported 45 million dollar severance package.

I'm glad I watched - it was an awesome show! Steve Carell (sort of in his Michael Scott role) processed his exit interview, Tom Hanks shared a farewell toast with him, Neil Young performed "Long May You Run", and Will Ferrell belted out "Freebird", along with Billy Gibbons, Beck and Ben Harper.

However, the part I liked the most was Conan's classy farewell speech. At some point, we're all going to face a little adversity in life. Maybe we'll get fired, laid off, or feel forced out of our job. If that ever happens to me, I hope I handle it with the class that Conan displayed last night.

"Before we bring this rodeo to a close, I think a couple things should be said.
There's been a lot of speculation in the press about what I legally can and can't say about NBC.
And this isn't a joke.
To set the record straight, and this is true, tonight I'm allowed to say anything I want.
(Man laughs)
Um, and no it's not a joke, but thanks sir. Tonight I really am allowed to say whatever I want and what I want to say is this.
Between my time at "Saturday Night Live," "The Late Night Show," and my brief run here on "The Tonight Show," I've worked with NBC for over 20 years.
Yes, we have our differences right now, yes we're going our separate ways, but this company has been my home for most of my adult life.
I am enormously proud of the work we've done together. And I want to thank NBC for making it all possible.
I really do.
(Audience applauds)
A lot of people have been asking me about my state of mind and I'll be honest with you, walking away from "The Tonight Show" is the hardest thing I have ever had to do.
Um, making this choice has been enormously difficult. This is the best job in the world.
I absolutely love doing it and I have the best staff and crew in the history of the medium.
I will fight anybody who says I don't, but no one would.
But despite this sense of loss, I really feel this should be a happy moment. Every comedian...every comedian dreams of hosting "The Tonight Show" and for seven months, I got to do it.
And I did it my way with people I love. I do not regret one second of anything that we've done here.
(Audience applause)
And yeah.
And I encounter people when I walk on the street now who are just uh who give me sort of a sad look.
I have had more fortune than anybody I know.
And if our next gig is doing a show in a 7-Eleven Parking lot we will find a way to make it fine. We really will.
I have no problems. And, I don't want to do it on a 7-Eleven parking lot.
(Audience laughs)
But whatever, uh, finally I have something to say to our fans.
This massive outpouring of support and passion from so many people has been overwhelming for me.
The rallies, the signs, all the goofy outrageous creativity on the Internet uh, the fact that people have traveled long distances and camped out all night in the pouring rain.
(Audience cheers)
It's pouring! It's been pouring for days and they're camping out to be in our audience.
Really, you...Here's what all of you have done.
You've made a sad situation joyous and inspirational.
So to all the people watching I can never ever thank you enough for the kindness to me and I'll think about it for the rest of my life.
And all I ask is one thing...and this is...I'm asking this particularly of young people that watch...please do not be cynical.
I hate cynicism. For the record, it's my least favorite quality.
It doesn't lead anywhere.
Nobody in life gets exactly what they thought they were going to get.
But if you work really hard and you're kind, amazing things will happen. I'm telling you. Amazing things will happen. (Audience claps) I'm telling you.
It's just true.
As proof, let's make something amazing happen right now. (Intro Will Ferrell)

He thanked his employer. He complimented his team. He was heartfelt, authentic, positive, and grateful.

However, the part I liked the best was his advice to young people: “if you work really hard and you're kind, amazing things will happen”.

I've always tried to follow that advice as a leader and I hope my kids do as well.