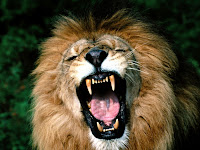 When antelopes hear the sound of a lion’s roar their instinct tells them to run in the opposite direction. Doing so, however, means they run to almost certain death because lions expect their prey to do just that. The male of the pride anticipates where the antelope will run while the lionesses lie in ambush opposite the male. When the lion roars, a startled antelope runs directly into the jaws of the waiting lionesses.

When faced with threats to our happiness or security, we humans all too often run away from the “roar” of daily life only to find, later, the threats returning or compounding. Effective leaders realize that survival and success lie in having the courage to confront threats. At moments in our lives we are called to account in a way that forces us to decide whether we will stand for our values. While we appreciate the need for courage in other areas of our lives, we may not appreciate how much courage it takes to lead in the workplace. The following practices of effective leaders all take courage. They are not all instinctual, however. Many must be learned.

The “ivory tower” mentality of many chief executives amounts to cowardice. Effective leaders regularly meet with and solicit information from frontline employees, seeking them out and approaching them even when it feels awkward or unnecessary. As Deborah Dunshire, M.D., chief of Millennium: the Takeda Oncology Company, says, “If you never have direct access, or don’t create those forums, you can have a divergence between what you believe is the case in the organization and what actually is. I think that’s where organizations lose momentum, lose engagement and start losing great people.” Leaders from Sam Walton to Deborah Dunshire derive success from talking regularly, openly, and encouragingly with their employees. They seek “direct access” to information, which engages and empowers informed employees.

It’s easy enough to say that you shouldn’t run away from conflicts. The reason so many of us do, however, is because we treat resolving conflicts as an A versus B scenario. A contest of wills. A question of who is going to be torn apart. Rather than framing conflict negotiation in win-lose terms, effective leaders approach conflicts from a problem-solving perspective. Often individuals in conflict have lost sight of the customer—the reason they are there. Conflict resolution then aims to focus the warring parties on their shared interest—the customer’s interest. Rather paradoxically, by directing attention away from self-interest, leaders can actually help individuals gain insight into their own behavior. When leaders move away from “win-lose” talk they can often see a problem that needs solving—a reality—beyond the viewpoints of A and B.

My model of a responsible adult and a tremendous leader is my friend and client Marliese Mitchell. Mitchell started her professional career as a nurse, earned an MBA at Harvard, worked her way up the ladder, and eventually took a job as president of the world’s biggest international hospital consulting firm. On her first assignment in this position she visited a hospital in Singapore where she heard some disturbing rumors about the sale of baby boys. Instead of running from the news, Mitchell decided to work incognito as a staff nurse to learn for herself whether the rumors were true. What she discovered about the hospital practices was worse than she imagined and led to criminal convictions backed by the World Health Organization and the United Nations, among others. When Mitchell heard the roar she ran toward it despite the dangers. Her story involves so much physical courage and personal integrity that I want everyone to read it, maybe more than once; I tell it in nearly every book I write. In Mitchell’s situation, the peril of confronting the roar may have at first seemed equal to the peril of ignoring it. Despite the great moral imperative, some might wonder why Mitchell took the risk. In fact, ignoring the problem, Mitchell realized, could have eventually cost her more: her job, the respect of employees and clients, and her integrity.

All of these acts of courage involve confronting someone or something directly—frontliners, individuals in conflict, irresponsible associates, or your own values. Here’s the simple logic: threats rarely disappear on their own so running from them won’t help. Facing them will get you much further.

Emmett Murphy, Ph.D., is Founder and President of Murphy Leadership, a global leadership consultancy. Murphy is the author of several books including Talent IQ: Identify Your Company’s Top Performers, Improve or Remove Underachievers, Boost Productivity and Profit. He is currently at work on his new book, Entrepreneurial IQ.