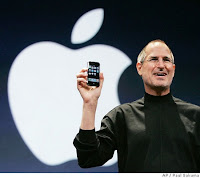 Thanks to Miki Saxon for sending this guest post idea my way. I like it. It’s an interesting follow-up to my last post, Can a Poor Presenter be a Great Leader?

By Carmine Gallo, Author of The Presentation Secrets of Steve Jobs: How to Be Insanely Great in Front of Any Audience

Apple’s Steve Jobs returned to a standing ovation at a special music event in San Francisco on Wednesday, September 9th, marking the return of the world’s greatest corporate storyteller. For more than three decades, Steve Jobs has elevated product launches to an art form. His techniques, sharpened over the years, can be used by CEOs, entrepreneurs, small business owners, educators or anyone who wants to inspire an audience. Here are seven ways that Steve Jobs dazzles an audience, and so can you.

1. Create a “holy smokes” moment.
Every Steve Jobs presentation has one moment that leaves everyone in awe—the water cooler moment. These “moments” are scripted ahead of time to compliment his slides, the Apple Web site, press releases and advertisements. In 2008, Jobs pulled the MacBook Air out of a manila, inter-office envelope to show everyone just how thin it was. Bloggers went nuts and it was the most popular photograph of the event. On September 9, 2009, the “water cooler” moment wasn’t a product at all. Instead, it was Steve Jobs himself walking onstage after a long, health related absence. He told the audience he now had the liver of a mid twenties person who died in a car crash and was generous enough to donate their organs. “I wouldn’t be here if it wasn’t for such generosity,” he said.

2. Stick to the rule of three.
The Rule of Three is one of most powerful concepts in writing. The human mind can only retain three or four “chunks” of information and Jobs is well aware of this principle. A Steve Jobs presentation is typically divided into three parts. During the September 9th event, Jobs outlined the presentation into three areas: iPhone, iTunes and iPod. Jobs has even been known to have fun with the principle. At Macworld 2007, he introduced “three revolutionary products;” an mp3 player, a phone, and an internet communicator. After repeating the three products several times, he disclosed the big announcement—all three would be wrapped up in one, the iPhone. The rule of three turned into a water cooler moment. Ask yourself, what are the three things I want my audience to know? Not twenty things, just three. You can get away with more points in written form (like an article) but stick to three in public presentations and verbal conversations.

3. Share the stage.
Jobs rarely gives an entire presentation himself. Instead he surrounds himself with a supporting cast. He had a large supporting cast at the September music event including Apple’s VP of product marketing, Phil Schiller and iTunes software designer, Jeff Robbin. At least four game developers took to the stage as well. Songwriter Norah Jones capped it off. Of course, you’re not going to have Norah Jones wrap up your next presentation, but if you can share the presentation with another team member (or customer) by all means, do so.

4. Introduce heroes and villains.
Every great drama has a hero and a villain. Steve Jobs is a master at creating drama. We see this technique as far back at 1984 when Apple first introduced the Macintosh. Jobs set up the product launching by painting a picture of IBM “big blue” bent on “world domination.” Apple, he said, would be the only company to stand in its way. The crowd went nuts. One can argue that the “I’m a Mac, I’m a PC” ads are hero vs. villain vignettes played out in thirty second ads. Great presentations have an antagonist—a common enemy—so the audience can rally around the hero. Your brand and your product play the role of the hero.

5. Think visually. Apple presentations are strikingly simple and visual. For example, there is very little text on a Steve Jobs slide. While the average PowerPoint slide has 40 words, there were far fewer than forty words in the first dozen slides of the September music event. When Jobs talked about the popularity of iPhone around the world, his slide showed 23 flags of different countries instead of country names. When said the iPhone app store was celebrating its first anniversary, a slide appeared with a birthday cake holding one candle. When he talked about lower iPod prices, the new price was accompanied by photos of the iPods. This is what psychologists call “picture superiority.” It simply means that ideas are more easily recalled when presented in text and images than in text alone.

6. Create Twitter-friendly headlines.
Apple makes it simple for the media to talk about their products—the company writes the headlines for them. Now, reporters will tell you that they like to come up with their own headlines, but why then did hundreds of them use “World’s thinnest notebook” to describe the MacBook Air? Because that’s the way Steve Jobs described it, and frankly, it’s hard to come up with a better way of saying it. Jobs always describes a new product with a concise phrase that fits well within a 140 character Twitter post. What’s an iPod? “One thousand songs in your pocket.” What’s Genuis Mix for iTunes? “It’s like having a DJ mix the songs in your library.” If you can’t describe what you do in one sentence, go back to the drawing board.

7. Sell dreams, not products.
Steve Jobs is passionately committed to changing the world and his passion shows in every presentation. Anyone can learn the specific techniques he uses to create visually creative slides, but those slides will fall flat if delivered without passion and enthusiasm. When Jobs introduce the iPod in 2001, he said that music was a transformative experience and that in its own small way, Apple was changing the world. Where most observers saw a music player, Jobs saw an opportunity to create a better world for his customers. That’s the difference between Jobs and the vast majority of mediocre leaders—Jobs is genuinely committed to changing the world and he’s not afraid to say it.

©2009 Carmine Gallo, author of The Presentation Secrets of Steve Jobs: How to be Insanely Great in Front of Any Audience.

Author Bio
Carmine Gallo, author of The Presentation Secrets of Steve Jobs: How to Be Insanely Great in Front of Any Audience, is a presentation, media-training, and communication-skills coach for the world’s most admired brands. He is an author and columnist for Businessweek.com and and a keynote speaker and seminar leader who has appeared on CNBC, NBC, CBS, MSNBC.com, BNET, RedBook, Forbes.com, and in the New York Times, the Wall Street Journal and Investor’s Business Daily, as well as many other media outlets. Gallo lives in the San Francisco Bay area and is a former vice president for a global, top-ten public relations firm.For more information please visit http://www.carminegallo.com/