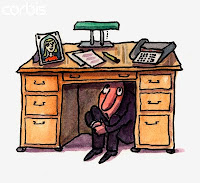 A question from a reader:

“I want to know where I stand with my manager and what I need to do to grow in a company very different from the one I was laid off from three years ago. He’s a very savvy manager – I really admire him – but feedback just isn’t his thing. For the last two years, when it’s come to evaluation time, he’s said “other employees don’t need to discuss it.” So I can’t “ask for feedback.” If the question strikes your fancy, can you give me some tips for coaxing him into it without making it as repellent a task as he imagines?”
Feedback can be one of the most powerful ways to develop and improve performance. It doesn’t cost anything. Most employees say they want it and yet they don’t get enough of it. So why are many managers so hesitant to give it?
There’s two reasons for this.
First of all, although most people will say they want feedback, most of us really don’t respond very well to it. It’s just human nature. When we hear about something that challenges our self-perception of who we are, a basic psychological “fight or flight” mechanism kicks in. In many cases, once we have a chance to process it it, we may benefit from it in the long run. But it’s usually not our immediate reaction to fully embrace it.
Secondly, most people don’t like to give feedback and are not very good at it. Again, it’s basic behavioral modification. When we do something and get a negative response (like touch a hot stove), we tend to avoid those things.
We spend a lot of time trying to teach managers to give feedback. However, by the time we finish training them on all of the do’s and dont’s of giving performance feedback, they become so paralyzed with fear that they would rather just avoid it.
In fact, out of all of the basic leadership & management skills, giving feedback consistently ranks as one of the lowest scores in leadership development 360 degree assessments.
Speaking of 360s, that’s one of the reasons these assessments are so popular and effective. It’s a way of giving feedback in an easy, anonymous way, without having to deal with the person’s reaction.
OK – so given all of these inherent challenges, just how can we coax feedback from a reluctant manager? Here’s a few tips:
1. Practice the skills of receiving feedback.
See “18 Tips for Receiving Feedback“. Who knew it could be so hard? (-:
2. Ask for “feedforward” instead of feedback.
Read this summary by Marshall Goldsmith. Feedforward overcomes many of the inherent barriers of feedback.
3. Make it safe, easy, and rewarding for your manager.
It’s often easier to give caring, candid feedback in the context of an informal mentoring, or development planning session, instead of a formal performance review session.
When you are able to coax out some advice, make sure you follow-up with positive examples of how that feedback helped improve your performance or enhance your worklife. Even better – write a letter a few months later thanking the manager. This may help him get over his distaste for it.
Finally, here’s an idea for all of us. Have you ever received “tough love” feedback from a manager that you didn’t agree with and didn’t respond very well to? Then, later on, you realized the manager was right and the advice was actually helpful? How about writing that manager a note and thanking them, letting them know what a difference they made in your life. I’ll bet any manager would cherish that letter forever.
Note: will the reader who submitted this question please send me an email?