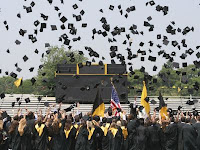 In honor of the class of 2009, here’s a collection of advice on leadership from commencement speakers Robert Gates, Madeleine K. Albright, William Weldon, Steve Jobs, and Conan O’Brian, along with my summary at the end.

From Defense Secretary Robert, speaking to the West Point class of 2009:

"I’ve come to believe that few people are born great leaders. When all is said and done, the kind of leader you become is up to you, based on the choices you make. And in the time remaining, I’d like to talk about some of those choices, and how those choices will be shaped by the realities of this dangerous new century.

I would start with something I tell all the new generals and civilian executives that I meet with at the Pentagon. It is a leadership quality that is really basic and simple – but so basic and simple that too often it is forgotten: and that is the importance, as you lead, of doing so with common decency and respect towards your subordinates. Harry Truman had it right when he observed that one of the surest ways to judge someone is how well – or poorly – he treats those who “can’t talk back.

Two anecdotes from our country’s founding capture the independent thinking of the American soldier and the greatness of the Army officer who led them. During the Revolution, a man in civilian clothes rode past a redoubt being repaired. The commander was shouting orders but not helping. When the rider asked why, the supervisor of the work detail retorted, “Sir, I am a corporal!”

The stranger apologized, dismounted, and helped repair the redoubt. When he was done, he turned toward the supervisor and said, “Mr. Corporal, next time you have a job like this and not enough men to do it, go to your Commander-in-Chief and I will come and help you again.” Too late, the corporal recognized George Washington. The power of example in leadership.

A second fundamental quality of leadership is doing the right thing even when it is the hard thing – in other words, integrity. Too often we read about examples in business and government of leaders who start out with the best of intentions and somehow go astray.

I’ve found that more often than not, what gets people in trouble is not the obvious case of malfeasance – taking the big bribe or cheating on the exam. Often it is the less direct, but no less damaging, temptation to look away or pretend something did not happen, or that certain things must be okay because other people are doing them; when deep down, if you look hard enough, you know that’s not true. To take that stand – to do the hard right, over the easier, more convenient, or more popular wrong – requires courage.

Courage comes in different forms. There is the physical courage of the battlefield, which this institution and this army possess beyond measure. Consider the story of Lieutenant Nicholas Eslinger, Class of 2007. He was leading his platoon through Samarra, Iraq, when an enemy fighter threw a grenade in their midst.

Eslinger jumped on the grenade to shield his men. When the grenade didn’t go off, the platoon leader threw it back over the wall. And then it exploded. At the time of this incident, then-Second Lieutenant Eslinger was only 16 months out of West Point. He would later receive the Silver Star.

But, in addition to battlefield bravery, there is also moral courage, often harder to find. In business, in universities, in the military, in any big institution, there is a heavy emphasis on teamwork. And, in fact, the higher up you go, the stronger the pressure to smooth off the rough edges, paper over problems, close the proverbial ranks and stay on message.

The hardest thing you may ever be called upon to do is stand alone among your peers and superior officers. To stick your neck out after discussion becomes consensus, and consensus ossifies into groupthink.

From Madeleine K. Albright, to the class of 2007 at The University of North Carolina at Chapel Hill:

For inspiration, I can think of no more moving a story than that involving a passenger on United Flight 93, which went down in Pennsylvania on 9/11. That passenger, Tom Burnett, called his wife from the hijacked plane, having realized by then that two other planes had crashed into the World Trade Center. “I know we’re going to die,” he said. “But some of us are going to do something about it.”

And because they did, many other lives were saved. Since that awful morning, the memory of their heroism has uplifted us. It should also instruct us. Because when you think about it, “I know we’re going to die,” is a wholly unremarkable statement.

Each of us here this morning could say the same. It is Burnett’s next words that were both matter of fact and electrifying. “Some of us are going to do something about it.”

Those words, it seems to me, convey the fundamental challenge put to us by life. We are all mortal. What divides us is the use we make of the time and opportunities we have.”

From William Weldon, Johnson & Johnson CEO, to the Quinnipiac class of 2009:

“Down the road in New York, right along the dividing line that separates Brooklyn and Queens, there is a cemetery. It’s called Cyprus Hills, not very big. And if you were to stroll through it, you might come across one headstone in particular. On it are inscribed a set of dates, a name and one brief sentence.

The dates are 1919 to 1972. The name is Jackie Robinson, a longtime Connecticut resident, and the sentence is simply this: 'The value of a life is measured by its impact on other lives.'

There is no better measure of your success as a leader or your value to the human race… than to live your life every day with the world just as proud of you… as we are proud of you… on this extraordinary day.”

In what some would consider to be one of the greatest commencement speeches ever, Steve Jobs to the Stanford class of 2005 (it’s 15 minutes, and worth watching):

And finally, on the lighter side, here’s Conan O’Brien, to the Harvard class of 2000:

“So, that’s what I wish for all of you: the bad as well as the good. Fall down, make a mess, break something occasionally. And remember that the story is never over. If it’s all right, I’d like to read a little something from just this year: “Somehow, Conan O’Brien has transformed himself into the brightest star in the Late Night firmament. His comedy is the gold standard and Conan himself is not only the quickest and most inventive wit of his generation, but quite possible the greatest host ever.” Ladies and Gentlemen, Class of 2000, I wrote that this morning, as proof that, when all else fails, there’s always delusion.”

Dan’s leadership advice for the class of 2009 summary:

1. There are no natural born leaders. The kind of leader you become is up to you.
2. Treat everyone with respect, especially those who “can’t talk back”.
3. Have the courage to do the right thing even when it’s the hard thing
4. Don’t like it? Then do something about it
5. Your value as a leader will be measured by the impact you have on others
6. The only way to do great work is to love what you do. If you haven't found it yet, keep looking, and don't settle.
7. Stay hungry, stay foolish.
8. When all else fails, there’s always delusion

« Would Your Peers Vote for You?
Another Too Dumb to be True Leadership Development Program »
AFTER ENTRY