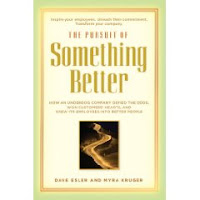 Guest post by Dave Esler and Myra Kruger, authors of The Pursuit of Something Better:

Is leadership defined solely by results? Most of the flood of leader literature makes that assumption. Leaders get things done. They win wars, championships, fortune, fame. They cure sick teams, organizations, whole countries. Not by themselves, of course – we followers have a limited role, as foot soldiers, employees, voters, or, as Michael Jordan once memorably described his Chicago Bulls teammates, “my supporting cast.” But the leader is that (usually) charismatic individual who is somehow able to motivate or drive or carry his/her team to achieve an (often) unlikely goal. Conversely, the absence of significant achievement generally signifies a leadership-free environment.
Much of what we think about leadership follows from this original assumption. We think, for example, that the tougher the goal, the greater the leader; our most iconic leaders – the Pattons, the Lombardis, the Iacoccas – were somehow able to achieve the impossible. It is the magnitude of their achievements that make them great leaders, not their methods; who cares, in fact, about their methods, as long as they were able to get something of extraordinary importance done?
As luck would have it, many of the leaders whose achievements capture the popular imagination are pretty tough cookies, so focused on winning that they are often willing to bend the social and organizational rules that bind us lesser mortals. Nevertheless, in a results-focused world, their achievements qualify them as leadership role models. Their successes explain the staying power of anti-social leadership mantras like “nice guys finish last” and “winning isn’t everything, it’s the only thing.”
All this is fine for popular entertainment, but have you ever had to work with one of these results-obsessed types who has read one too many ego-drenched variations on “How I won the war?” Whatever short-term numerical advantage that “whatever it takes” approach may produce is surely offset by the long-term damage it does to organizational morale, pride, and reputation.
There is a better leadership model, and it has been systematically cultivated, tested, and measured over the past decade in one of the country’s most important and least known social experiments. The organization is U.S. Cellular, a regional wireless service provider whose nearly 9,000 employees specialize in delighting their six million customers and giving their giant competitors – Verizon, AT&T, Sprint – heartburn. The CEO is Jack Rooney, as forceful a man as any of his peers, but one who believes that effective leadership is defined as much by how a goal is accomplished as by the achievement itself.
U.S. Cellular is unknown in New York or Los Angeles, but it is a competitive terror through much of the Midwest and in regional pockets from Maine through Oklahoma to Washington. According to conventional business wisdom, however, it should not even exist. In 2000, the year Rooney started his tenure, it ranked eighth in an industry that has been consolidating aggressively ever since; today, all its midsize peers are gone, absorbed by giants. U.S. Cellular remains proudly independent, “the little engine that could” in corporate form.
It owes its survival to Rooney’s unique concept of leadership and its role in building a values-based culture that he calls “the Dynamic Organization.” Rooney’s leaders are expected to produce results, even more than they would be in most organizations; his underdog company’s survival depends on it.
Getting results, however, is only half the leadership story here. How those results are achieved is at least equally important – and that “how” is very specifically defined by the six Values and ten Behaviors of the Dynamic Organization. An annual survey of every one of the company’s employees (with an astounding participation rate that has never been lower than 92 percent in the ten years it has been conducted) assesses how well each leader has met that exacting standard, from the point of view of his/her direct reports. Those results play a critical role in evaluating leader performance, determining compensation, and defining future career paths.
Leadership in a company that takes concepts like ethics, respect, openness, and diversity as seriously as U.S. Cellular can look deceptively easy: no politics intrude, no bullies obstruct, open lines of communication beckon everywhere. On closer inspection, however, leadership turns out to be much more challenging than in most other companies. Leaders must “get it done” as aggressively as anywhere else; but they are held equally accountable for the Values and Behaviors.

This two-dimensional accountability for both the “what” and the “how” means that U.S. Cellular is one of the few companies on the planet where making the numbers – getting results – is not enough to win a leader job security, let along praise and honor. A result that is achieved the wrong way – in a way that violates the letter or spirit of the Dynamic Organization – does not count. Leaders would do better to fall short of a goal than to reach it unethically, or by taking advantage of a customer, or by treating peers, employees, vendors, or even competitors with disrespect.

Just-the-results leadership may achieve goals, but it has limited transformational power. It produces more and more of the same old stuff, and that’s fine, if the same old stuff is what the organization needs. The problematic outcome of this brand of leadership is often an admirably efficient vehicle with steering problems; the defects are rarely visible, but are liable to produce with distressing frequency an Enron, a General Motors, or an Iraq. When such disasters occur, we are always amazed in hindsight at the damage wrought by once-respected “leaders.”

The values-based leadership required by Jack Rooney insists on examining the messy details implied by “how?” and “why?” It may be less efficient than the “no questions asked” variety, and it takes time to reach critical mass; but now that U.S. Cellular has developed hundreds of leaders with the ability not only to get things done, but to go beyond the numbers to change lives for the better, it has a unique competitive advantage with limitless potential.

David Esler and Myra Kruger are the authors of the newly released book The Pursuit of Something Better (New Ridge Books), available at Amazon.com and bookstores nationwide. They combined their 30 years of corporate communication, human resources, and consulting experience into Esler Kruger Associates in 1987. Their consulting firm focuses on culture change, organizational surveys, and executive counsel in effective leadership. They are based in Highland Park, Illinois.
_________________________________________________
The Carnival of HR!
Check out this month’s Carnival of HR, hosted by Mark Stelzner from Inflexion Advisors. It’s an awesome collection of posts written by some of our best HR blogger experts. Mark’s an all-around great guy and really knows his business – I always enjoy reading what he has to say and I think you will too.